OKLAHOMA! was chosen by the company as part of our 50th year celebrations.

It was presented as an ‘in the round’ production. Following each performance we were pleased with the comments from our audiences as to how involved they felt with the show. Some said they nearly joined in the Hoedown!

There probably isn’t any fan of musical theatre who doesn’t know know the plot!

Just in case, briefly…. the story  is set in the ‘wild west’ at the turn of the century when cattlemen and farmers were fighting over fences and water rights. In the middle of that controversy are two more rivalries. One between a cowboy called Curley and a hired hand named Jud, both in love with Laurey. The second involves Ado Annie, Will and Ali Hakim, a trio that will provide plenty of laughs.

Oklahoma! broke all box office records when it opened in 1943. It was the first musical to tell a story with music, dance and lyrics, 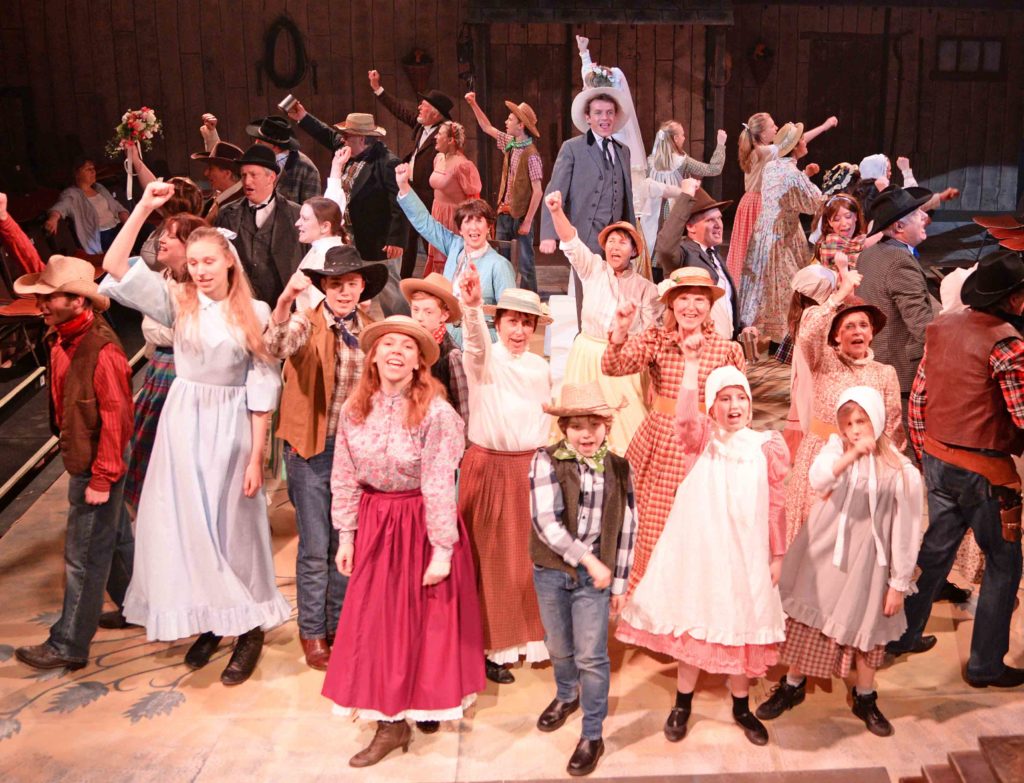 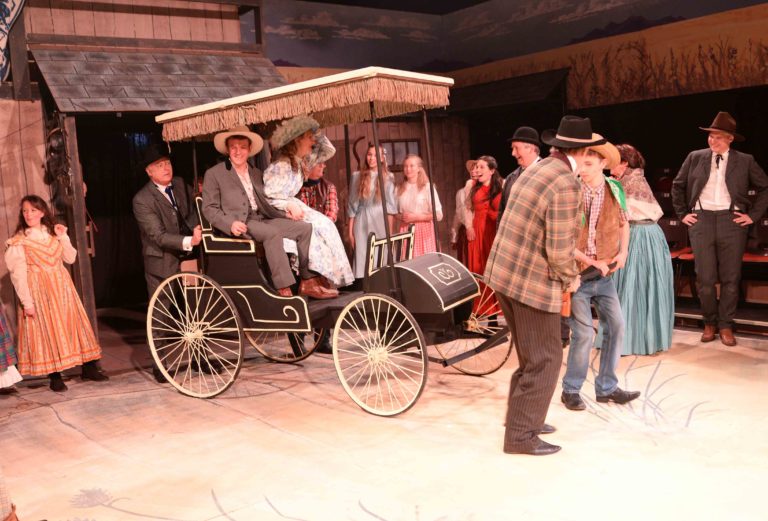 The music and lyrics have proven to be some of the best in musical theatre with songs that include “Oh What a Beautiful Morning”, “The Surrey with the Fringe on Top”, People Will Say We’re in Love, “I Can’t Say No”, “Oklahoma! and many more. Very noticeable playing the show ‘in the round’ how the audience were singing along!

Oklahoma! forever changed the form of musical theatre.It is considered by many to be the first musical comedy to have a plot, musical score and dances that were necessary ingredients to advance the story line. 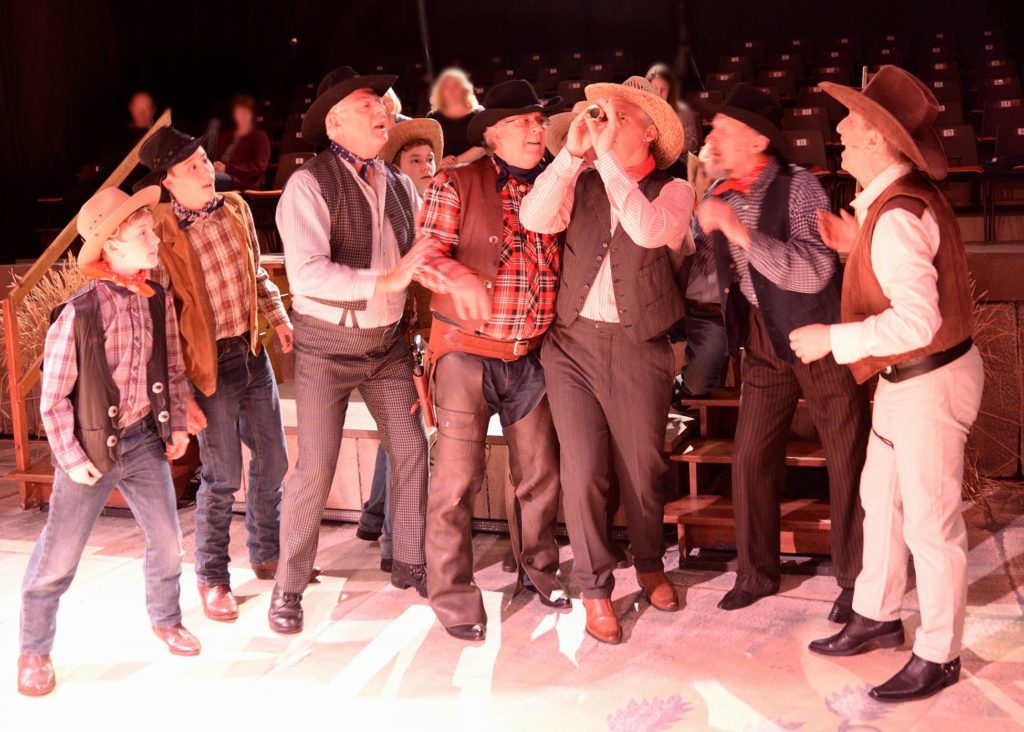 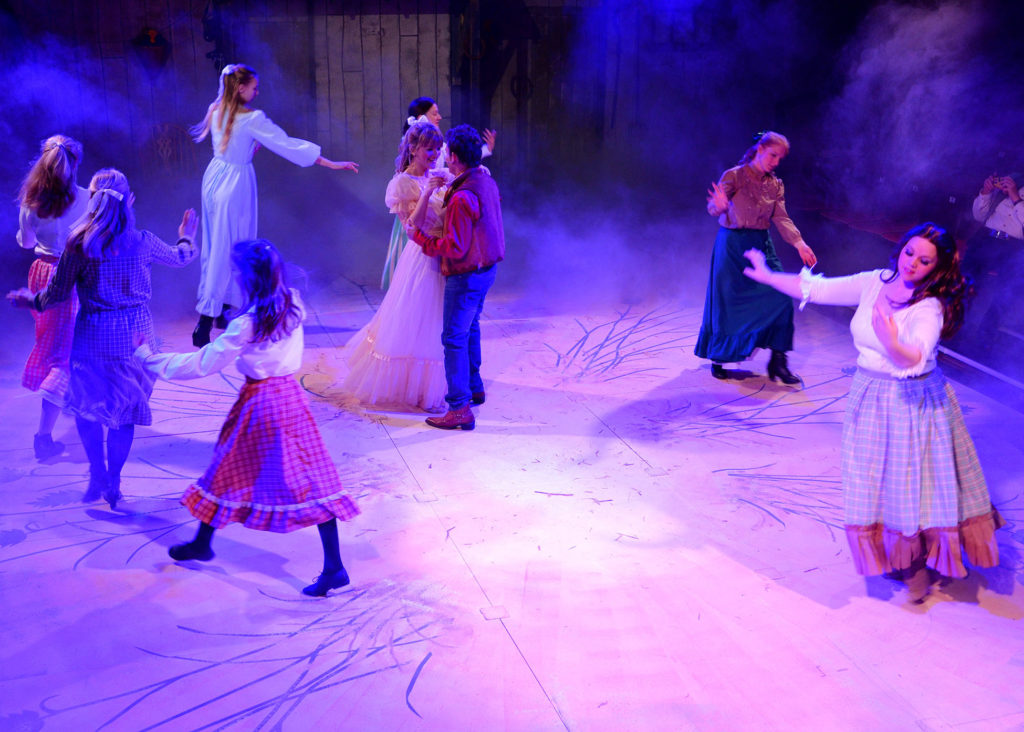 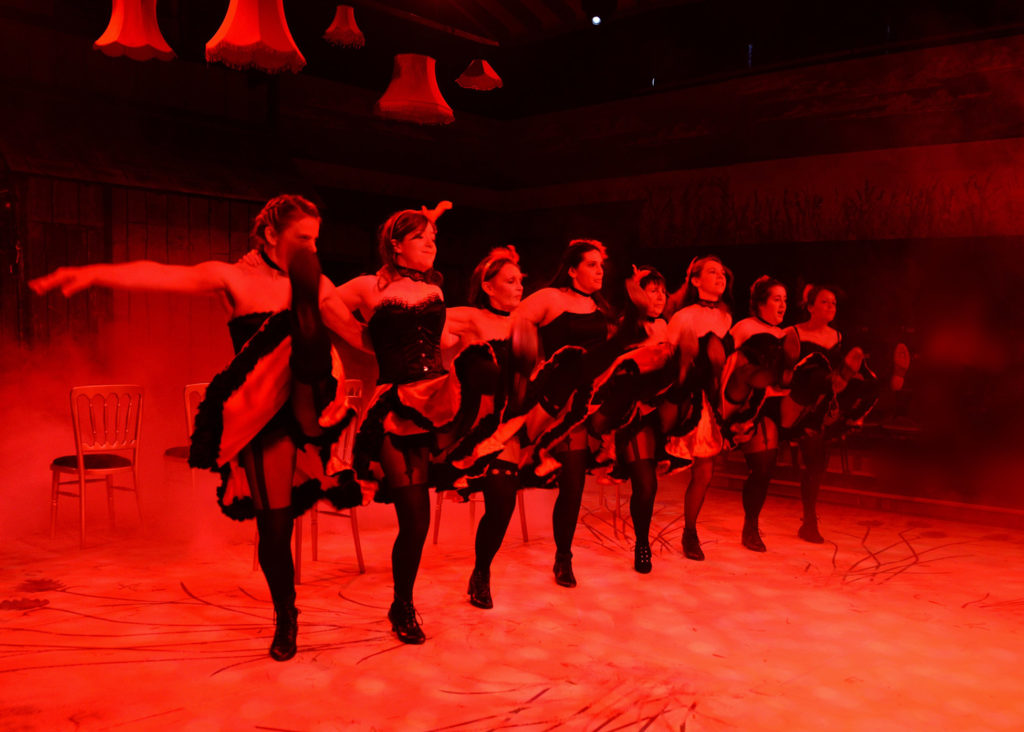 Having heard such good reports of CODS’s productions over the years I was delighted to have the opportunity to attend their Easter presentation of Oklahoma in this their 50th anniversary year, and was certainly not disappointed.

From the warm welcome on arrival in the straw strewn lobby of the Queen Elizabeth Academy in Crediton, with the front-of-house staff dressed appropriately in cowboy style and a delightful “Surrey” on display, the scene was well set for the show.

The school hall was transformed into the front yard of the ranch with the surrounding walls a panorama of the vast plains of the territory. Director and choreographer Emily Killeen used the space to great effect making the most of the varied exits and entrances available, and bringing the audience into the action from all sides of the auditorium, the scene in the smokehouse was particularly effective.

All the principals were strong and believable; Curly and Laurey sparked well off each other; Jud Fry was suitably broody and menacing; Aunt Eller rather more glamorous than usual but still showing that stoic calming voice of experience.

Will Parker was cheeky and amiable vying with Ali Hakim, a very natural debut performance, for the attentions of the fickle Ado Annie played with gusto and conviction.

This was a big company and the chorus numbers were particularly well put together, there was a real feel of a barn dance at the Box Social, and “Territory Folks” was uplifting! It was obvious that a lot of hard work and preparation had gone into this production with all the members of the company working together on stage and behind the scenes, it was lovely to see such a good mix of age ranges involved.

Musical direction was in the capable and experienced hands of Ian Crew, with the suitably attired band playing in a cleverly designed pit on the roof of the ranch house!

A production that certainly had it “all” and “nothing” was spared, great music, singing and dancing, making for a super show!