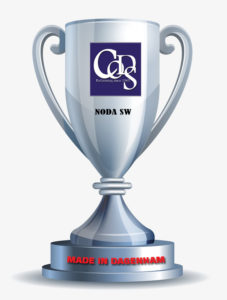 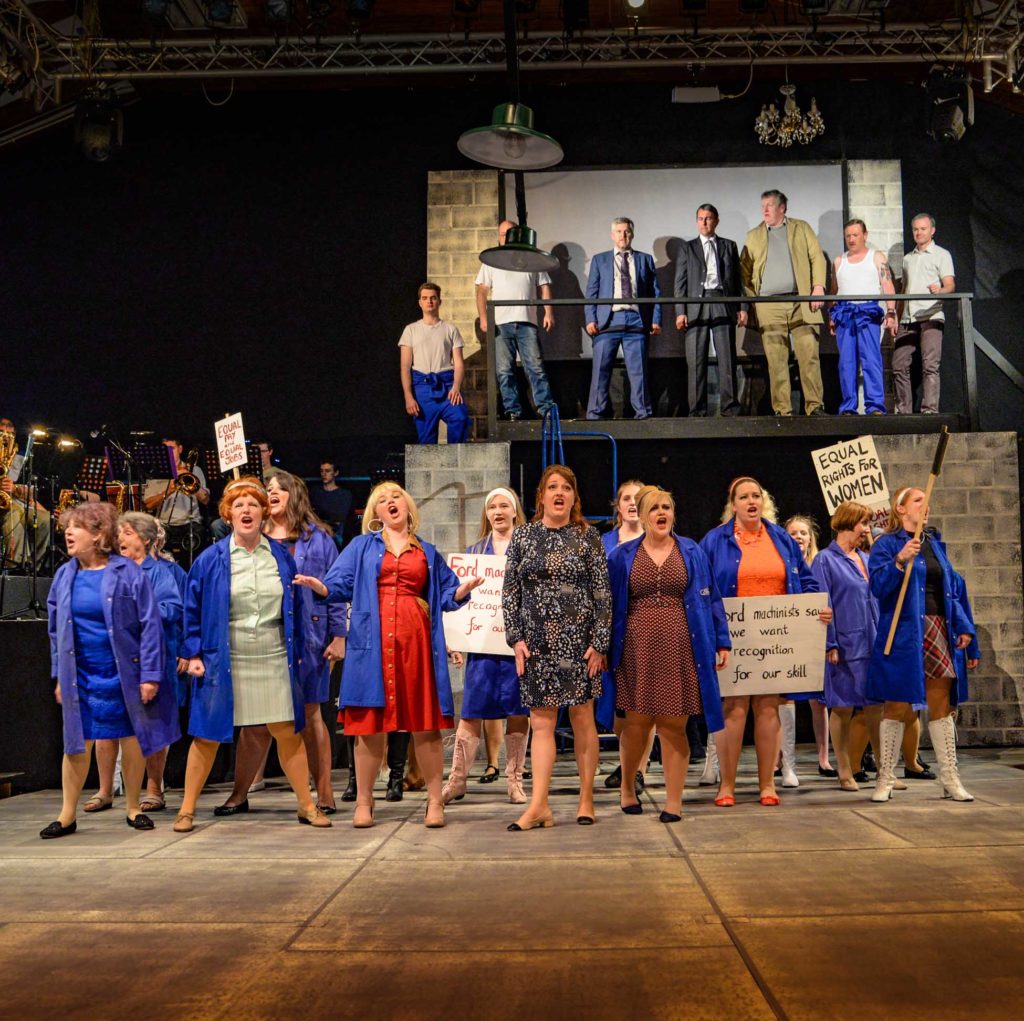 Based on the 2010 film of the same name, Made in Dagenham is drawn from the real-life 1968 sewing machinists strike at the Ford factory in Dagenham, Essex.

This strike was influential in the passing of the Equal Pay Act of 1970. The musical focuses on the how the strike develops and how Rita O’Grady becomes the leader of the women strikers, taking on the mantle of Connie the Union Convenor.  She encourages the women of the Ford factory to walk out after they are re-classified as unskilled workers, while their male counterparts see their wages increase.

After Rita and Connie are patronized and snubbed by the factory at a union meeting, the women’s grievances over their worker status turn into a fight for equal pay. 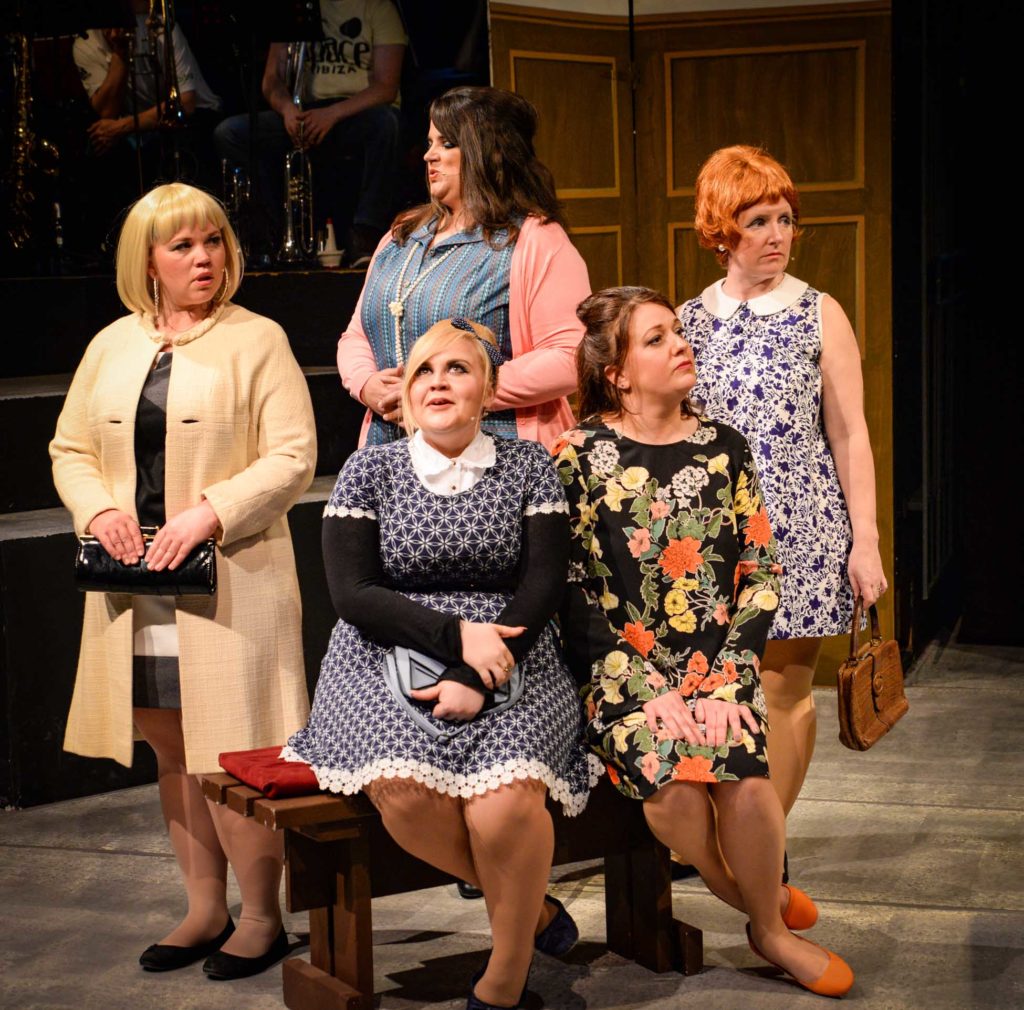 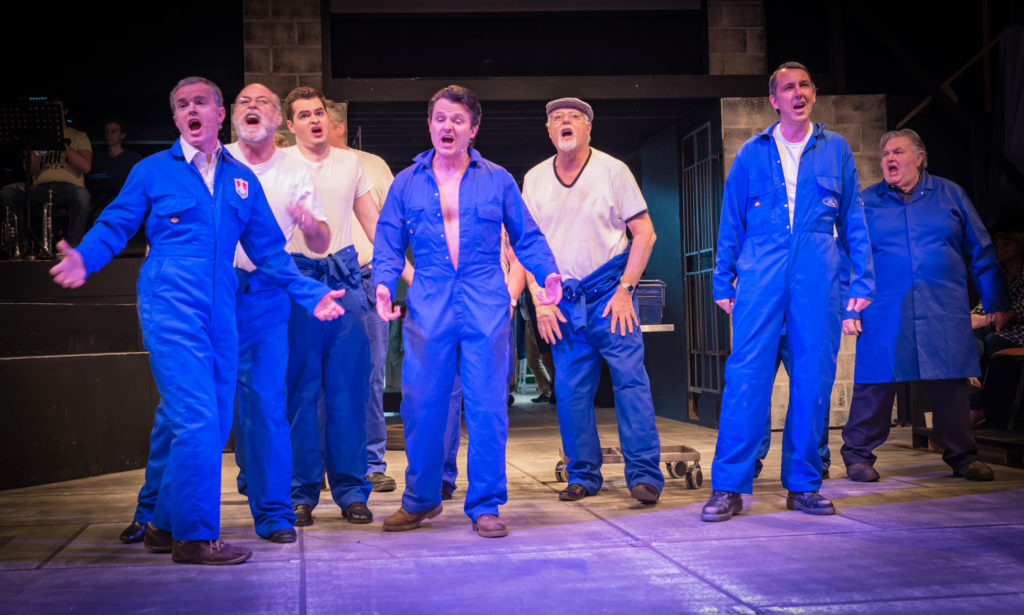 Determined not to be treated like the poor relation, the women vote unanimously to strike (“Everybody Out”) and encourage the women at the Liverpool factory to strike also. However when the American boss flies in and lays off 5,000 men as a result, including Rita’s husband Eddie.

Cracks begin to show in the women’s solidarity. Risking her marriage and friendships, Rita continues her efforts for equality and gives a rousing speech at a televised Trade Union Conference (“Stand Up”), leading to the passing of equal pay within the union. As Eddie finally recognizes his wife’s achievements, the women celebrate their life-changing success.

A beautifully written show full of fun, comedy, and some tearful moments. The music has all shades of colour from beaty rhythms,  to comical lyrics and an uplifting feel good ending.
CODS version of this production was performed “in the round” which suited the fast moving scene changes and action of the plot.

Photographs from ‘MADE IN DAGENHAM’ and previous CODS productions
are all on this gallery.

Made in Dagenham has been a wonderful experience for members of CODS and, it would appear, for our friends and followers. A modern show with a great message seemed to connect with everyone who had anything to do with it, on or off stage, participating or watching. There have been so many messages on Facebook, Twitter and in general comment.

We are posting just a small selection on this page, together with our thanks to all who helped to make this show such a success.

Thank you to our sponsors, to all who advertised in the programme and to the sponsors for each night.
CREDITON DAIRY : THE BIKE SHED : ADERO PRECISION COMPONENTS : VEITCH PENNY SOLICITORS : GILBERT STEPHEN SOLICITORS : TODD LETTINGS : ASHGROVE KITCHENS

NODA REVIEW                 Made in Dagenham         CODS  April 10th 2017  QE Academy Lower School (Barnfield)
Director and Choreographer Emily Killeen  Musical Director Allan Fouracre   Crediton (CODS) certainly made “Made in Dagenham” their own and it should have been re‐named  “Made in Crediton”!  With CODS, you know as soon as you walk in the doors that the atmosphere will be created with  different props etc. that straight away gets you in the mood, little did I expect, that the kitchen being  used outside in the foyer would be wheeled in to use on set! It’s these touches that are so cleverly  used in a school hall that has been totally transformed top to bottom from flooring to lamps; so well  done. I want to congratulate those concerned with props, set and lighting, so professional.  The Band sounded really good and were strategically placed, although at times a little loud, but I’m  sure that would have been overcome in subsequent performances. Many congratulations to the MD.  As for the acting and singing, what talent CODS has in its members. This was a performance to  remember for all the right reasons! Perdie Wright as Rita O’Grady had it all, acting and singing with  skill and if “Stand up” didn’t move anyone, then they must have been somewhere else. It was done  so well with the chorus timing their standing with the song. Just brilliant!  Complementing Perdie was  Andy Kirby as Eddie O’ Grady who played the role with great sensitivity, you really did feel sorry for  him being left at home looking after the kids!  Hazel Price as Connie Riley gave a wonderful performance that did not go over the top, she pitched it  just right.  Clare (Buffy Fouracre) as the dumb blonde gave a performance that was so real!    Masterly!  Harold Wilson was not an easy role to play (especially when a lot of the audience would have  memories of the actual person) but Paul Walker got into it convincingly, with no trouble and had  some great lines.  Barbara Castle, well what can I say, Bridget Merrett not only looked like her but sounded like her.  simply perfect.  Mike Canning as Tooley did an excellent job. His entrance was performed as if it were a show  stopper, with his cowboy hat and smoke with the lights down low. Showing his silhouette was a great  touch and you soon realised that you do not mess with Tooley. A superb performance.  Heather Barlow as Beryl gave everything she had got to this demanding role and came over well, not  wasting a line, all were so well delivered!  The choreography complimented the show along with great groupings that used all the floor, along  with using props along the way especially the desk top, Just super touches that helped make this  show what it was. A great success!   There is much more I could say with so many to mention in this strong cast. May I congratulate all  those in the show. Crediton is very fortunate to have such talent in its midst, it was a faultless  performance that it could have been performed professionally.  Emily Killeen, you should be jolly proud of this show and of your achievement. Congratulations!   I  could have seen it all over again!
Graham Liverton  Noda Rep District 5

On behalf of Exmouth Musical Theatre Company we would like to congratulate the cast, orchestra and production team of Made in Dagenham on such a wonderful show. We came to see Made in Dagenham last night and had such a great time. Your ensemble and principal cast were fabulous and we were belly laughing and grinning from ear to ear throughout the show.

ANDREA LAWRENCE: SAVILLS   Just a line to say thank you so much for the complementary tickets to last night’s show. I really enjoyed it, as did my colleague Hillary.

For me, Beryl, Lisa, Clare, Sandra and Barbara played amazing parts and really entered into the spirit of their characters. But of course the stand out performances were from Rita, Eddie, Sharon and Graham O’Grady … outstanding performances, and what adorable children.

A huge well done and congratulations to all of the cast on such a wonderful show and for engaging so well with the audience.

I will certainly be watching CODS perform again.

I hope the performance continues to be a huge success for you all.

With very best wishes and thank you again

Dagenham, the musical, tonight at Crediton – Friday – QE School, Barnfield Road, what an evening ! Purchasing the penultimate ticket available for the evening, a full house bar one audience member, rightly so a full house, from the opening the audience were almost engulfed by the performance.

Clever set designs, minimalist yet powerful, the skilled use of the screen above and the scenery changes both by participants and nifty accomplices, brought us back to the mid sixties and the feeling of a significant shift in time.

The cast were frighteningly realistic, so exemplary was the casting, everyone felt perfect for the part they played, the performances so skilled as to be professional, yet to simultaneously portray the innocence and naivety of some of the characters required real talent and consistency of focus.

Add choreography that was faultless and the quality of singing, supported by a tireless and flexible musical support group, aided by good sound management and lighting, this was a phenomenal musical undertaking so well executed.

The empathy with the actors, the emotions so credibly portrayed, qualities so important to highlight a story that’s timeless, not just an industrial dispute in its day, a milestone for women’s rights, equal pay, fairness and equality that we still sadly have to strive for today.

Characters presented their lives, ordinary and extraordinary people combined, strange circumstances, sadness, melancholy, joy and happiness, close and bitter relationships, a whirlwind of emotions played out amidst the surrounding audience. It was impossible not to become a part of the musical, when the audience stood alongside the actors, in solidarity, in support, in feeling we were there and invited into the cause. We were there in tears an laughter literally overwhelmed at times with the empathy, irrespective of political belief.

In summary, what a powerful and highly disciplined performance so rich in effort and achievement in more senses than just watching a play, you leave feeling that you’ve just been in and really experienced a part of history. Well done CODS