Written and directed by Paul Walker

The story is set in Crediton, or Kirton to use it’s old name. This is our town and it is set in the heart of Devon. Many families had members who went to the front to fight in the trenches. The folks left behind could only imaging what they were enduring, but they got on with their lives as best as they could. Sadly many of those who went did not return and gave their lives for their country.

Central characters in the story were the Setter Family and a local nurse called Edith Appleton, who left her home to nurse the wounded in just behind the battle lines.

This show was the idea of Paul Walker, a CODS member. Paul conceived and planned this project over a period of time and was able to include it in the 2019 CREDFEST programme. Set in the Parish Church, members of the society and others from the community joined together to tell the story through drama and song.

It was a fitting tribute to those long gone, who lived through these extraordinary times. It was much appreciated by the audiences who came to see the show over the run from 18th – 21st June. 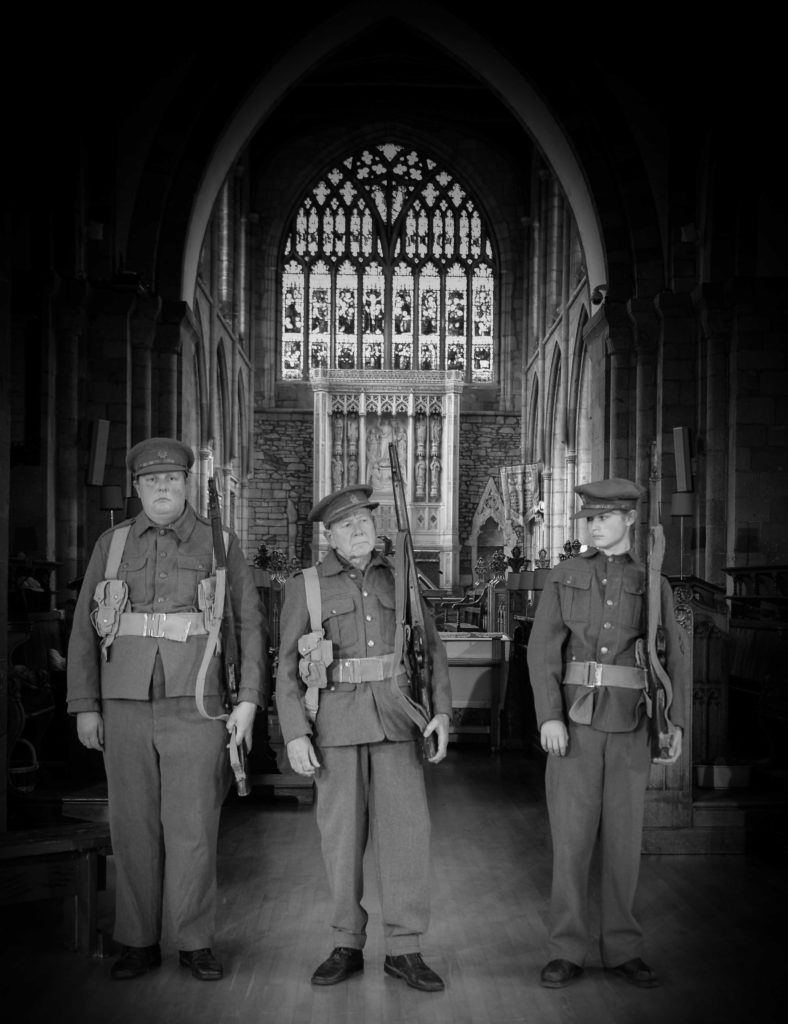 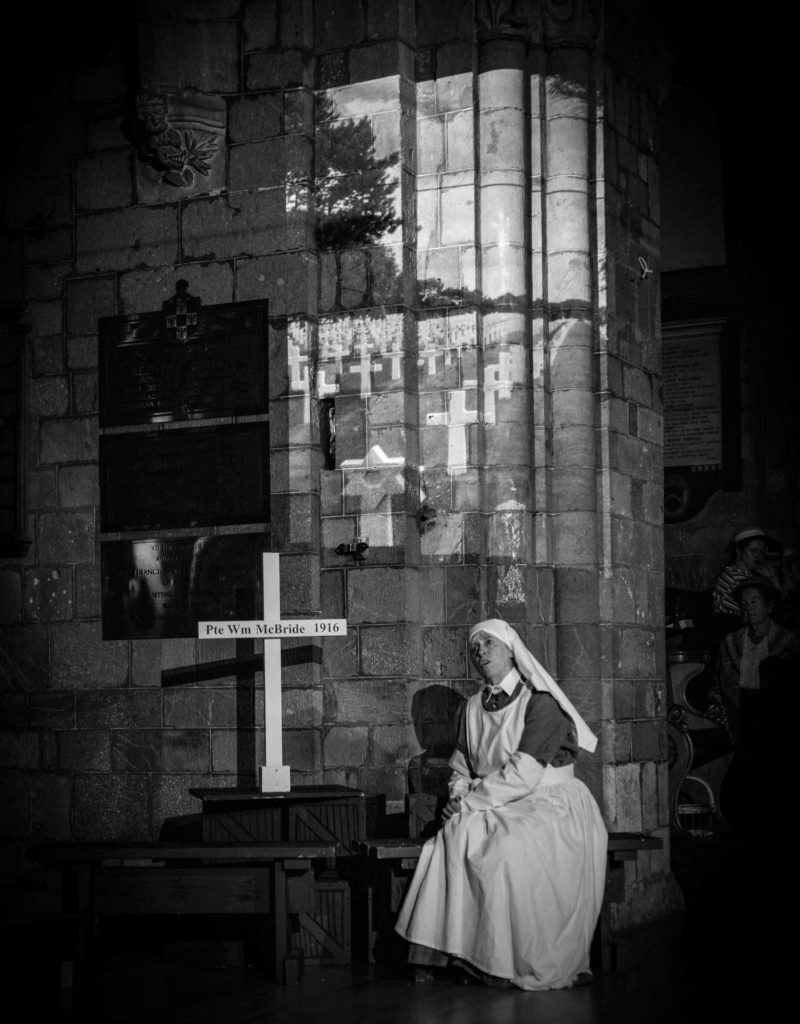 Here are a few comments from Paul about the the story  ……….

The project grew out of a desire to commemorate the ending of the First World War. In 2014 I saw a production of “The War To End All Wars”, presented by the Pennymoor Singaround, a group of folk singers putting together a series of songs about the First World War as a tribute to the Devonshire Regiment.

I wanted to create a Drama using word and song which would celebrate the contribution made by the people of Crediton and surrounding villages. I saw a display in Crediton museum which related the history of the Setter Family.

Out of this the story loosely revolved around Harriet Setter who sent 9 sons off to war, all returned home but unfortunately one died of wounds received and died in 1919. Another principal character was a District Nurse called Edith Appleton who wrote a series of diaries from the front line. Edith was in Crediton at the start of the war and departed from there to the Western Front.

I contacted all the writers of the songs and the relatives of Edith Appleton for permission to use their material, which they gratefully agreed. I was also extremely grateful to the research carried out by Leala Watson, and John Heal. The production took place during the Credfest 2019 in Crediton Parish Church.

This was I hope, in a small way, CODS giving something back to the community which has always supported the Society so well. 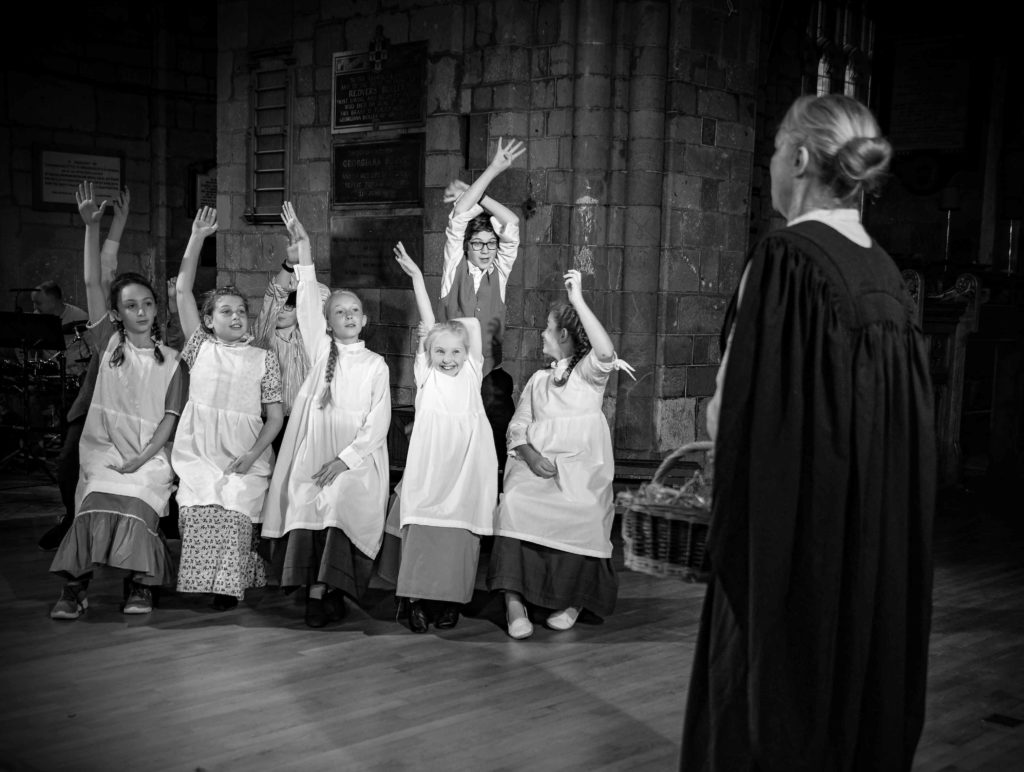 A message from Dick Robinson, the great nephew of Nurse Edith Appleton, who featured in the play.

Hello Paul.
We are now back home in Gloucestershire and just wanted to tell you how very moved we.were by your production. It was wonderful to see Edie in her starring role but also so poignant to see such a very wide range of ages of those taking part. We have spent the past few years telling Edie’s story, often becoming very ‘choked’ in the process but the mixture of music, singing, acting by real people together with the beautiful setting in the church just gave it all a new dimension.

A letter from Gill Ponsford who writes,
“Thank you so much for your wonderful portrayal of my great grandmother
Harriet. You brought her to life for me and how devoted she was to her
family.
Could you please pass on my thanks to Paul who made the evening of “The
Men who Marched Away” so special for me, one which I will never forget.

The Setters were a wonderful family and I am proud to be one of them.”

From Paul and Isobel Penny:
We would both like to say what a brilliant and well put together, emotional play. The Men who Marched Away was. We unfortunately came on the last night, if we had come before we would have seen it at least twice. Very well done to all members of the cast and to Paul Walker . Thank you
Paul and Isobel

This was a very special play written by Paul Walker, whose desire to dramatise the lives (and deaths) of the people of Crediton during the first world war has simmered for some time ,and I am glad his determination to see it through meant that we ,the audience, were privileged to see and witness such a personal and local glimpse of a particularly poignant time in Crediton’s history.

Crediton Parish Church was clearly the best venue to portray this period of Crediton’s past, as this building, steeped in its own history must have witnessed so many moments of personal joy and tragedy through so many years.

The men who marched away leaving their families and loved ones behind were incredibly brave, but didn’t realise at the time what was to come and what horrors “over the top “was going to mean

Attending this particular piece of art form was a real privilege and was a fitting tribute to the people of Crediton.

The play was atmospheric, poignant, well written and sensitively performed.

The old Devon accents (gradually disappearing in our modern times) were so necessary to help with the real sense of history and helped bring the play alive. The narrator, based on a real Crediton resident of the time (as were all the characters) helped bring the scenes together, both happy and sad.

The singing was done beautifully together with the side effects of smoke and sound that complimented the scenes so well. The songs were well chosen and came from a variety of sources, including Devon’s own Show of Hands, who have supported the various commemorations of the Great War so enthusiastically.

I deliberately have not mentioned any of the cast because they were all so good and brought out the best in their portrayals. The height of the church roof meant that the lighter ladies voices were sometimes lost, and a bit of extra concentration was needed to catch all the words of the many beautiful songs. However, this did not detract from the overall impact of this production.

The Music Hall scene was a welcome relief (as it must have been at the time from the difficult and sad experiences that many families were undergoing) and involving the audience in the singsong complete with song sheets was a clever touch which lightened the mood considerably.

And here I am going to mention Cory Jenkins a 7-year-old who sang “The Rose in No Man’s Land “   This was sung so beautifully and with such confidence it brought a lump to many throats. You could have heard a pin drop and he received a well-deserved standing ovation at the end.

I very much enjoyed this splendid and unique production and all CODS own Work!

CODS You never cease to amaze me
Congratulations to all concerned with this very special production, especially the author and director, whose personal statement this was.

All I can say to those that did not see it; you missed a real treat!