Rodgers and Hammerstein had extraordinary success with their first musical ‘Oklahoma! So much so that they were initially quite worried about following up a smash hit. It was bound to be compared to their first production.

Carousel was based on a 1909 play by a Hungarian playwright called Ferenc Molnár. His play, Lilliom, was considered too depressing for the musical stage, but the creativity of Rogers and Hammerstein transformed it into another blockbuster hit which, after considerable reworking, opened on Broadway on April 19th 1945. It ran for 890 continuous performances. Our production ran from 15th to 20th April 2019.
On Friday 19th April we celebrated the 74th anniversary of that Broadway opening.

CODS production of CAROUSEL was presented in our ‘in the round’ format, much enjoyed by our audiences. In addition to the considerable amount of work put in by the cast at rehearsals, there was a huge amount of work to stage the show.

This year we had a new floor thanks to the ingenuity and hard work of Dean, Anton, Dave, Jonathan and MikeB. They created a portable ‘sprung floor’ the nearly the size of a school hall with no visible securing pieces, perfect for dance.

Another vote of thanks goes to Amy, our choreographer and her dancers who made very good use of this facility. 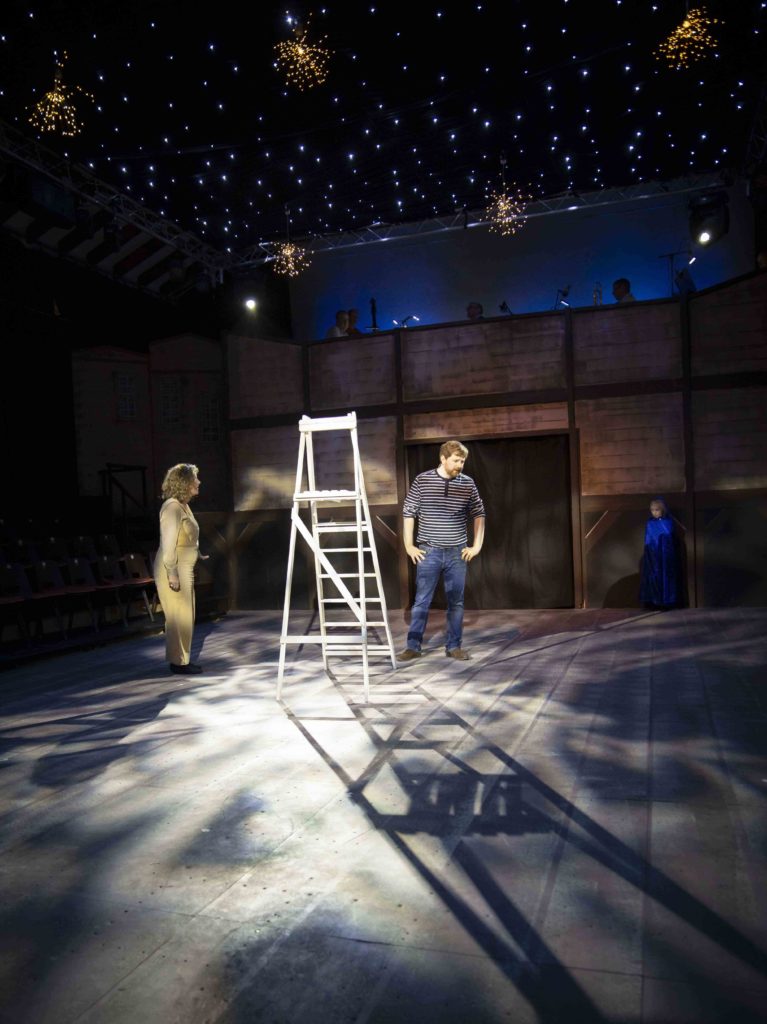 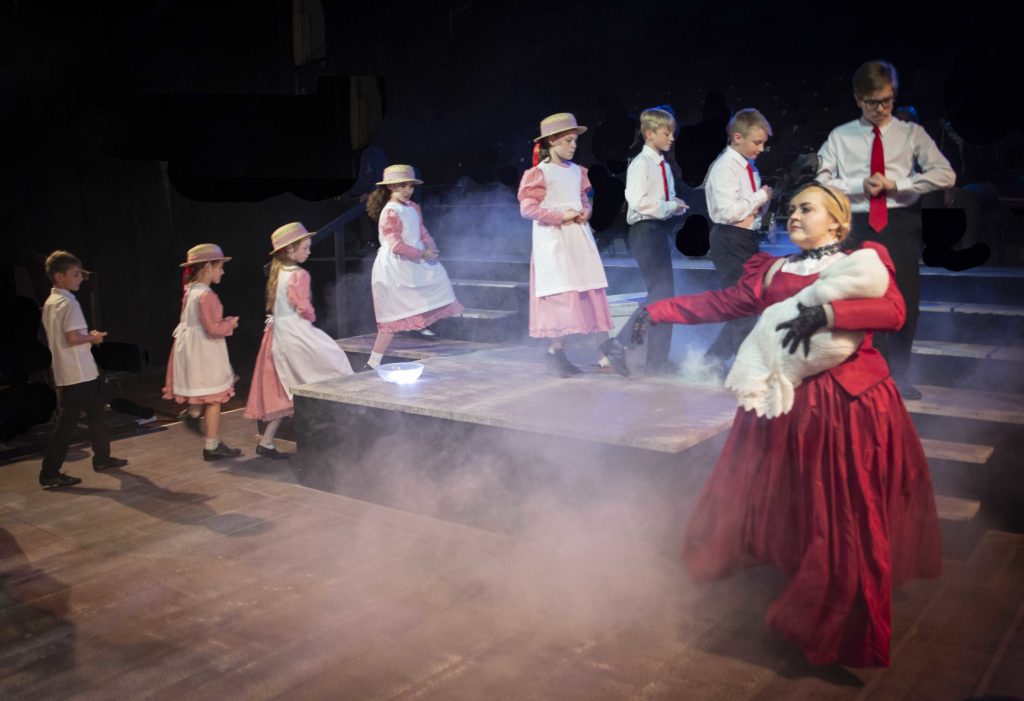 The ‘in the round’ revival of the show somehow brought out the vulnerability of Billy and Julie and the humour largely between Carrie and Mr Snow, though of course Mr Snow was as upright as he should be! The role of the Star Maker intrigued the audiences, and the contribution of the ‘Barkers’ and the Whalers, our two children’s teams added to the fascination of the production.

It is extraordinary that going back to something written 74 years ago, or 113 years in the case of the original play, that much of the story is still relevant today. Take the part of Billy for example, he’s likeable, none too reliable, rather easily led and hasn’t done much with his life. His character would be at home in Eastenders or Coronation Street. So would the character of Julie, the girl next door, the good looking nice to everyone sort of girl.

The story of Carousel is set in New England, a small coastal town where the main work is connected fishing and whaling. The time is around the late 1800’s to the turn of the century. The plot is essentially a love story that goes wrong.

Billy Bigelow works as a barker on the Carousel. His job is to drum up business and his main tactic for doing this is flirting with all the girls. When he takes a fancy to just one girl, his boss, the redoubtable Mrs Mullins, is angry with him. There is a row and he is fired on the spot. Amazingly the young lady at the centre of all this is a girl who is quite unlike all those Billy hass ever dated before. In fact Julie Jordan has never even had a boyfriend, but some how she and Billy are attracted to one another. I suppose they say opposites attract in matters of the heart.

Without giving away too much further detail, eventually Julie and Billy are married. Billy still can’t find work, largely because of his reputation. He becomes frustrated and rows badly with Julie, his lack of control results in him hitting her. The timing couldn’t be worse as she was just about to tell him he is to be a father.

With this news Billy determines he must provide for his new family. But how when he hasn’t even got a job? Falling back on the weaker side of his character he listens to an unscrupulous acquaintance named Jigger. He persuades Billy that there is an easy way to make money …. and lots of it! From here on in things do not go well for Billy. 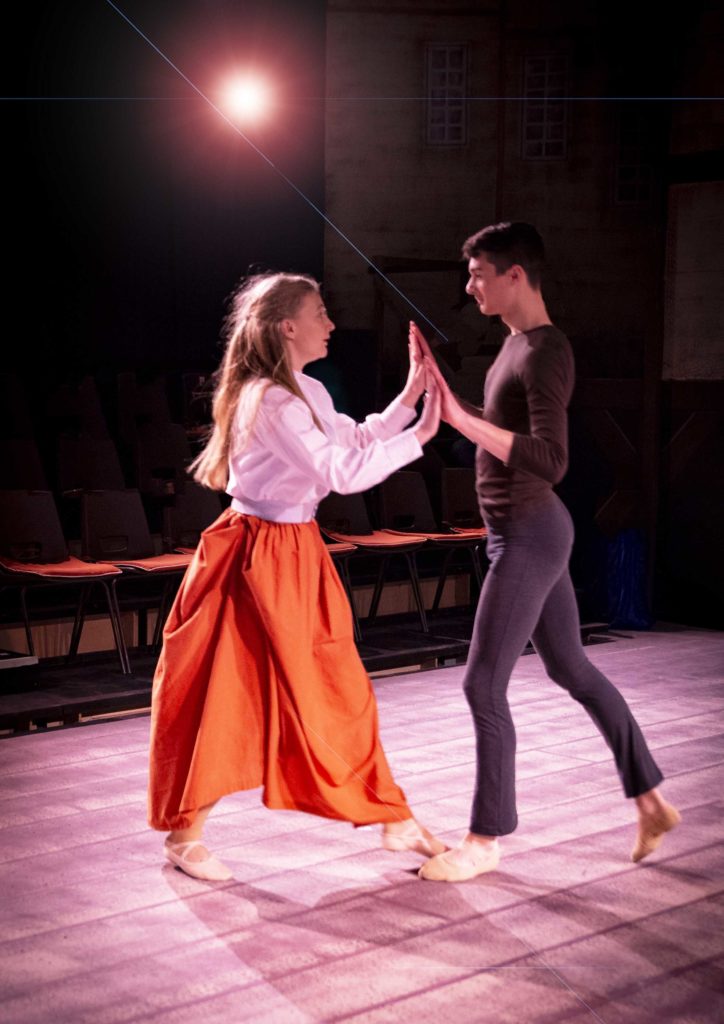 Photographs from ‘CAROUSEL’ and previous CODS productions
are all available on this gallery.

These range from the very early productions to the present day.

There are also some movie clips.

Based on Ferenc Molnar’s Play “Liliom” As adapted by Benjamin F. Glazer

CODS amateur production was by arrangement with R&H Theatricals Europe

Carousel was a great choice for CODS and was well done indeed. As always, with this society, you know what to expect as far as the venue is concerned. The school foyer was transformed into a Carousel with ribbon, and other great touches, that helped create the atmosphere, and on into the school hall which had been blacked out with curtaining. Good but simple props added to the show’s ambience with the Orchestra cleverly tucked away on a second tier.

The show was performed in the round, where it could be difficult for the whole audience to see the best angles, viewpoints and performances but CODS are skilled at this and managed it very well.

The acting was first rate, everyone in the cast playing their parts with skill and commitment!

A good strong chorus that gives the principals the backup they need, is essential and CODs never fail in this! A lot to do with their prowess when they perform their annual concert programme, I think.

The chorography was outstanding, complete with a young and particularly talented dancer; it gave it that air of quality that oozed from this production with an orchestra to match!

There was a clever scene that portrayed the Carousel itself with a maypole and horse cut outs. It was visually pleasing and easy to use and move and contributed to the seamless scene changes that happened without the audience really noticing adding to the slickness of this production.

The casting was so good that there was no weak link, everyone performed so well, they all really deserve a mention , but I must point out Julie Jordan (Nicola Wood) who played the role so sensitively and in Billy’s death scene had me blubbing! and what a singing voice!

Billy Bigelow (Jonathan Wood) again sung well and played his role with great authority. You wouldn’t want to argue with him!

Buffy May as Carrie Pipperidge sang wonderfully well, as we have grown to expect from this consummate performer and her acting skills matched throughout. A superb portrayal!

Starkeeper (Heather Barlow) was on stage the whole time, a difficult role having to keep up the performance the whole time watching and reacting to what was going on without detracting form the principals or the story

I must mention Penny Daw (Nettie Fowler) who gave a great performance along with Cathy Lamb as Mrs Mullins, and Paul Tebbit as Enoch Snow.

The whole show came over with a touch of professionalism, the chorus and principals, that had it all, and an innovative director in Ben Edgecombe who obviously knew what he wanted and got it! With a gifted choreographer in Amy Charles and an orchestra, under the baton of the very experienced Allan Fouracre, that sounded super and allowed the audience to hear every word, this was a show to remember and gave huge pleasure to the audience who surely went out humming the very memorable and evocative musical numbers.

For CODS to continue presenting such top quality shows in school halls and without their own theatre is a tribute to all concerned.

My congratulations to all concerned with the show.

A FEW COMMENTS FROM OUR AUDIENCES…….
Carousel was a truly wonderful and professional musical with some amazing performances. I did get my handkerchief out at one point. Thank you and all the cast and team for a wonderful experience.
Peter Brewer.

This year’s performance was wonderful. The entire cast was great, and the lead parts were exceptional. Well done everybody.  James `Turner

Gilbert Stephens were represented on the night by Judi Thistlewood from our Crediton office. Judi tells us, “the performance was very well done, an immense effort went into it from everyone and the audience had such fun. Buffy May, who played Carrie, was so impressive – a really stand out performance. The story was very moving, it brought a lump to my throat.”

Gilbert Stephens are always keen to support our local communities and being a sponsor for this extremely talented and hard working group of performers was very exciting.

A great show filled with energy and lovely singing. So important to involve the young children too.
Rose Campbell-Crocker.

I just wanted to put on record our congratulations to you all  for the recent performances  of Carousel ; the group I brought from  Down St Mary felt that this was one of your best  productions with the singing ,dancing and acting from the cast  very professional and  entertaining.We  enjoyed the whole evening and well done to you all.

Very best wishes for your future productions which we look forward to seeing.
David Lee