THE WITCHES OF EASTWICK.

In the small town of Eastwick, Rhode Island, everyone knows everyone else’s business, particularly Felicia Gabriel, the town’s resident busybody and know-it-all. She has the whole town on a tight leash; nobody dares to cross her! As Chair of the Preservation Society, she is launching a fund-raising bid to buy a local mansion, The Lennox House. Alas the event is curtailed by a sudden squall on an otherwise beautiful day. 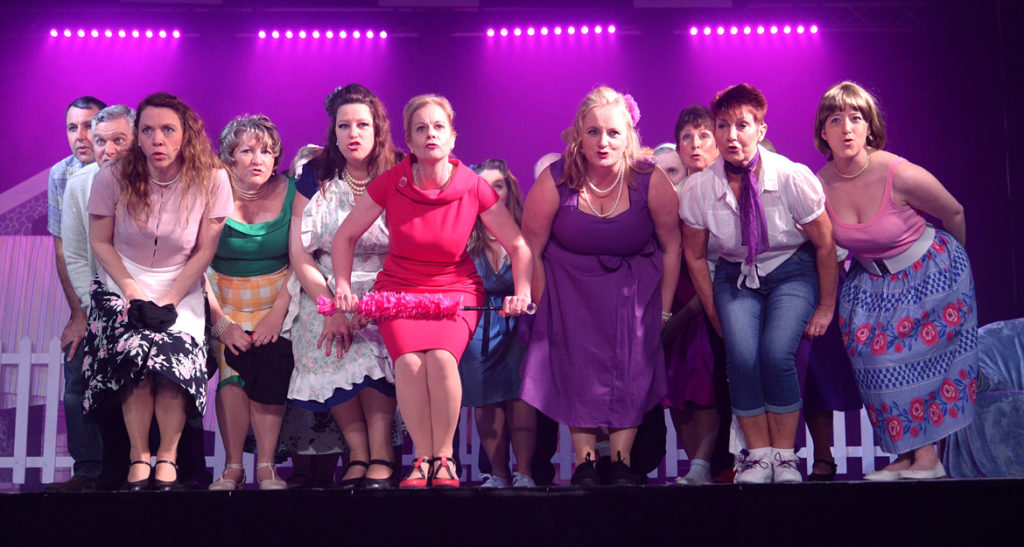 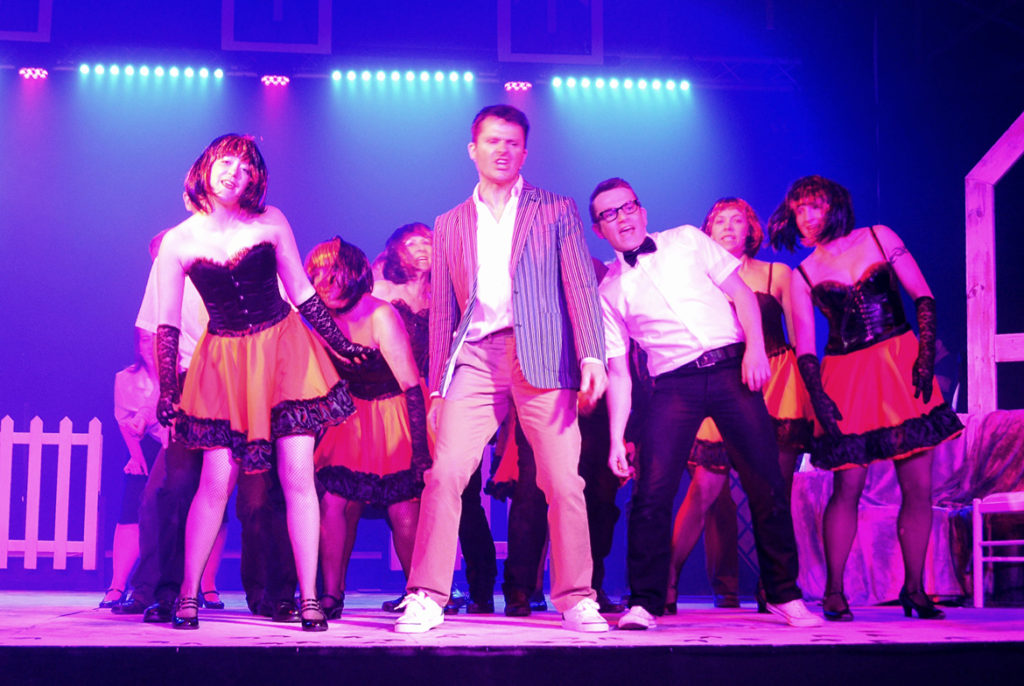 Alex, Jane, and Sukie, three local friends who don’t fit into Felicia’s regimented world, are amused that the event was so impressively rained off. They’d all been wishing for something to happen. Little realising the power their innocent wishes actually conjured up! Over a few Martinis they discuss their lives and what each is lacking… a man. Preferably as handsome as the very Devil himself. This time they really do need to be careful what they wish for!

Felicia tries again with a fund-raising concert at the local church, but just before the event she receives news that the Lennox House has been snapped up by a mysterious cash buyer from New York, one Darryl Van Horne.

Darryl appears at the concert and Felicia wastes no time in trying to turn everyone against him. However, he seems to have a strange charm that unleashes the normally straight-laced townsfolk, much to Felicia’s horror.

Alex, Jane and Sukie quickly fall for Darryl’s charms, little realising that he is seeing and seducing them all at the same time. The penny drops however when he invites them all over for tennis and a chance to meet his ‘friends’.

To share any more of the plot would spoil the fun… 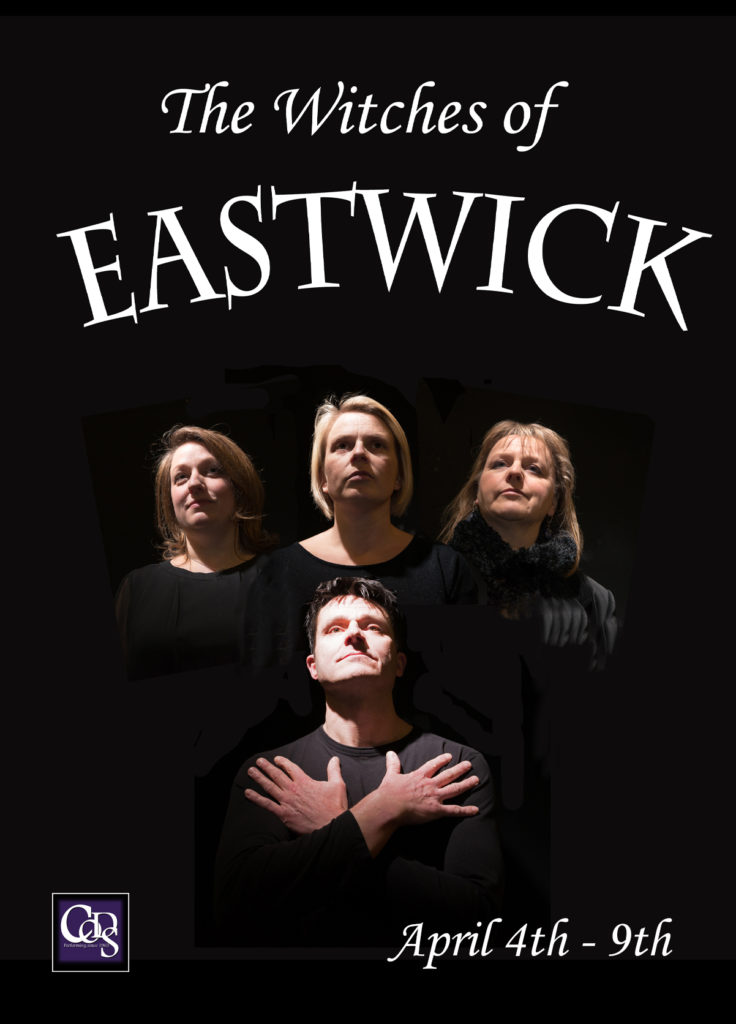 Photographs from ‘THE WITCHES OF EASTWICK’ and previous CODS productions are all on this gallery.

The Witches of Eastwick by CODS  April 7th 2016 By Graham Liverton NODA Rep.

It never ceases to amaze me how CODS always creates the atmosphere required for their shows by decorating the foyer with pointers to the show they are performing, thus creating an atmosphere from the moment you enter the building, and this, in a school hall, which has to be totally transformed in a short space of time. Witches of Eastwick was no exception. Egrets were the order of the day.

The School hall was completely disguised by a wonderful set that hid the orchestra behind a clever picket fence on the side of the stepped stage.

Kelly Vallance took the role of Alex Spofford, the least feminine and most feisty of the “witch” trio. Gillian McKenzie was Jane Smart in the more mature characterisation and Perdita Wright was the shy Sukie Rougemont, lacking in confidence. All played these challenging roles with great skill and great stage presence, that gave all three the individual characterisations required, but when coming together gave just the right balance that blended so well.

Darryl Van Horne – Mike Felstead was extremely convincing. He performed with such style and sexual energy that any woman would have been mesmerised in his presence.

Cathie Poole (Felicia Gabriel) together with Barry Stimson as the long suffering Clyde gave excellent performances sparking off each other with great aplomb, the scenes where Felicia was producing all kinds of foreign bodies from her mouth was skilfully performed.

Ben Edgecombe as Michael Spofford did well, loved his walk that gave him his character and his gyrations in the dancing was really very funny and well performed! He captured the pathos of this role as he struggled to cope with his first love

Steph Johnson as Jennifer Gabriel did well and, with Michael Spofford, made a great couple.

All the songs were well put over with superb choreography that one has grown to expect from Rachel Worsley.

The chorus did well and the groupings were cleverly arranged.

CODS never disappoint, this is not an easy show to perform and it has difficult music that does not come easily. The singing both in solos and chorus was done particularly well and my congratulations to Ian Crew MD. He must have been shattered every night after putting his all into it, along with his skilled orchestra.

Heather Barlow should be well pleased with this production of Witches of Eastwick, it was a night to remember for all the right reasons!

Taking on an epic musical like Dana P Rowe’s The Witches of Eastwick is a brave move for any local society, with this show needing an expert’s touch with all aspects of the production, in order for the racy and hilarious story to be told truthfully and yet, with grace. Crediton Operatic and Dramatic Society (CODS) rose to this challenge last week, with their commendable adaptation of one of my favourite musicals. This was my first visit to see a CODS’ production, the draw being a show which, to me, fulfils everything a stage musical should, with great music, exciting staging and characters with which everyone can feel an affinity.

The story follows three single women who are frustrated by the small town in which they live and who are looking for adventure in the shape of the ideal man. The dream beau seemingly appears in the guise of a charming and wealthy singleton called Daryl Van Horne, who feeds on their libidinous desires and helps them to harness their collective powers and realise their magical potential.

With the theme of sex right at the core of the story, Daryl needs to have the perfect amount of charm mixed with sleaze and that’s exactly what you got from Mike Felstead. Suave and a bit creepy, his scenes of seduction were enthralling and amusing, while leaving you completely convinced that the ‘little ladies’ would fall for his guiles.

The three witches, played by Kelly Vallance, Gillian Mackenzie and Perdita Wright, all made the very most of their individual songs, with elegance and intrigue. It was when they were combined however, that the ‘music began’, with some soaring harmonies and spine tingling melody lines, all expertly accompanied by the accomplished orchestra, under the baton of Ian Crew.

Another musical highlight came from two of the more junior cast members Ben Edgecombe and Steph Johnson as Michael and Jennifer, who’s ‘Something’ was simply glorious. Johnson portrayed Jennifer’s transition from innocent to harlot with style and Edgecombe’s devilish dealings with Daryl in ‘Dance with the Devil’ were divine.

With immensely clever staging, including a multi level performance area, the large and vibrant ensemble were able to perform Rachel Worsley’s lively choreography with panache and ardour and when led by Cathie Poole as the audaciously uptight Felica, the ceremonious Dirty Laundry was filled with class.

I mustn’t forget to mention the flying, of course, which is known to be one of the most difficult aspects of this musical to pull off, but which was achieved here in an ingenious and extremely convincing manor, similar to that currently being used at the Apollo Victoria, London, for the flight of another famous witch in the smash hit musical Wicked.

This was a great production of the Witches of Eastwick and I hope the show will spur CODS on to perform more brave and exciting musicals in the future.