In the dark turmoil of the French Revolution in 1789, our journey begins. A journey that will tear brothers apart, create new ties and change destinies. A blood thirsty mob storm the Bastille and drag the Comtesse Vervier to her terrible fate. Before facing her death, their desperate mother convinces her faithful servant Madame Cat to take her sons.. A twist of fate sees the two brothers parted to walk very different paths.

15 years on, Jacques has grown to be a zealous and true citizen of the French Republic. With no memory of his past roots, Jacques lives with his adopted mother and brother. He is a restless and ambitious young man dreaming of greater things. To their mother’s dismay, Jacques convinces his borther Francois to join him in Napoleon’s Navy aboard the Interpide. It is aboard this ship that they meet naval officer Guy De Morette. Their meeting is fraught with suspicion and anger, a beginning that will set the tone for their relationship. The locket worn by Jacques serves only to further their animosity.

Their naval career, however, is short-lived as the brothers are captured in battle. Although lucky to have survived, the two men now faced a grim reality. They are taken to the rat-infested hulk ship, Hector, where harch conditions threaten their very survival and Jacques thinks only of escape. Unde the cruel command of Lt Ross, they are subject to torment and humiliation, used as sadistic targets for the local gentry’s morbid fascination. This corrupt man delights in bullying the hapless prisoners. 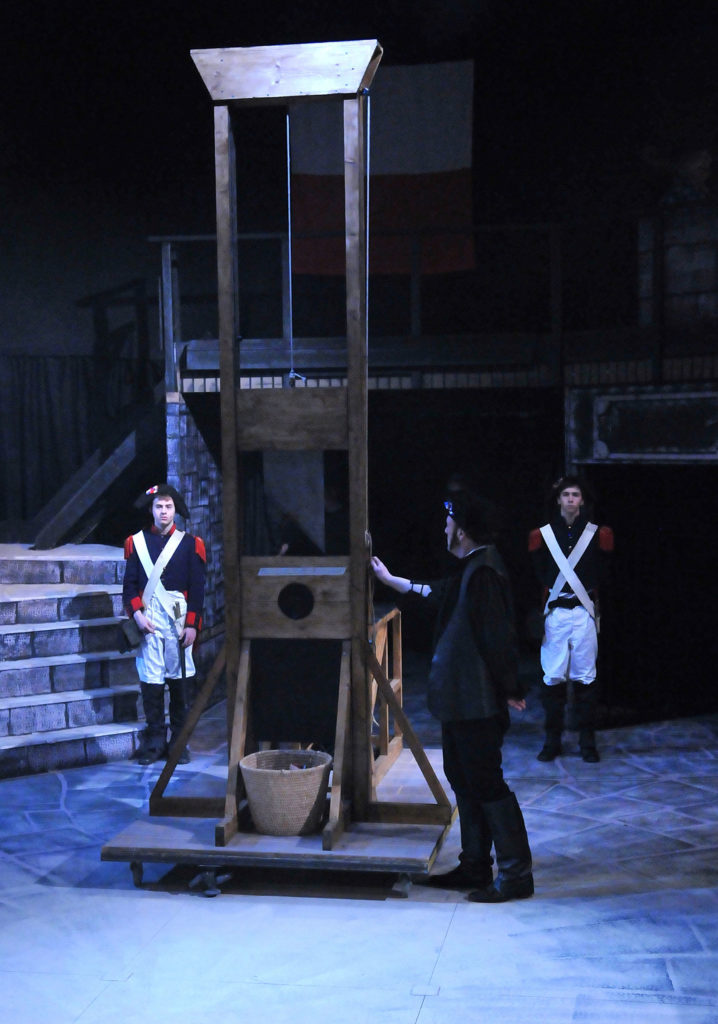 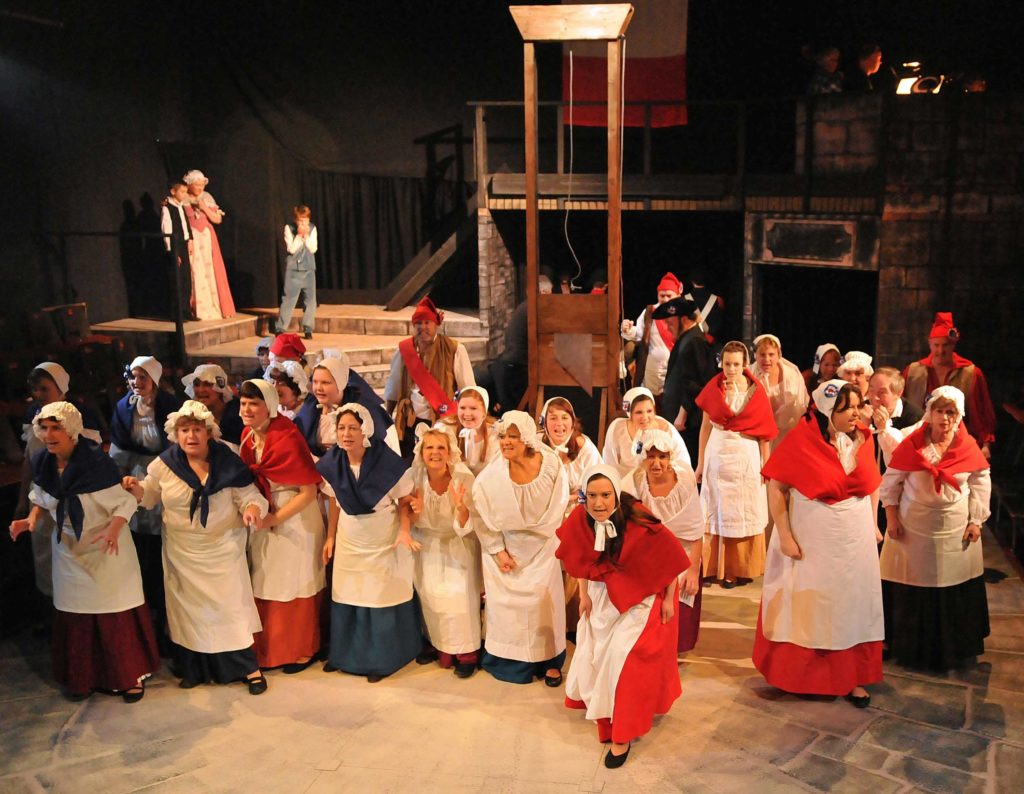 In what could be a serendipitous twist of fate, the brothers are billeted to families in Crediton. Guy follows on and finds himself distracted from his obsession with Jacques at that locket by the nave Mary-Ann Rosslyn. Her friend Grace finds herself drawn to Francois. Unknown to both women, the actions of these men will decide the course of their futures, for good or ill. Jacques’ patriotism and ideals still urge him to escape, a fact that will spell disaster for the stubborn young man. At first, the Crediton townsfolk are suspicious and wary of the French prisoners. With time, however, they come to know these men, living, working with and even loving them.

The brothers and their fellow billeted officers and midshipmen are finally moved on to the new prison at Dartmoor, Prince Town. Jacques’ state of mind leaves Francois heartbroken as he watches him deteriorate in the cachot.

He reflects on the loss of both his brother and the love he found in Grace.

An even sadder end can be found for Kirton girl Mary-Ann Rosslyn, who naively went to London to elope with Guy, who was bribed to do so by seething and rejected Lt Ross.

On being deserted on the wedding night, Mary-Ann returns to Crediton to meet her watery death in the River Creedy. She has been shunned by the town. 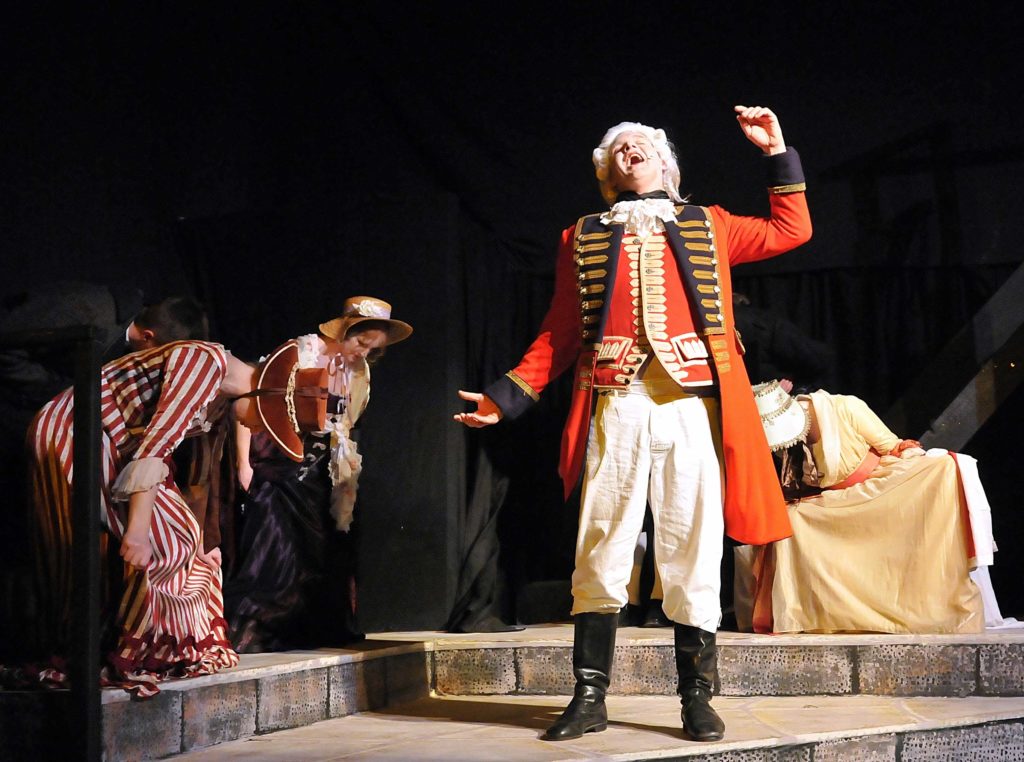 Based on true events, Brother Jacques is a show with its roots firmly in the Crediton community. This was a truly unique opportunity for CODS to perform a musical about its home and close to its heart, to call back an echo of the past with the kind of characters who may very well have walked its streets. 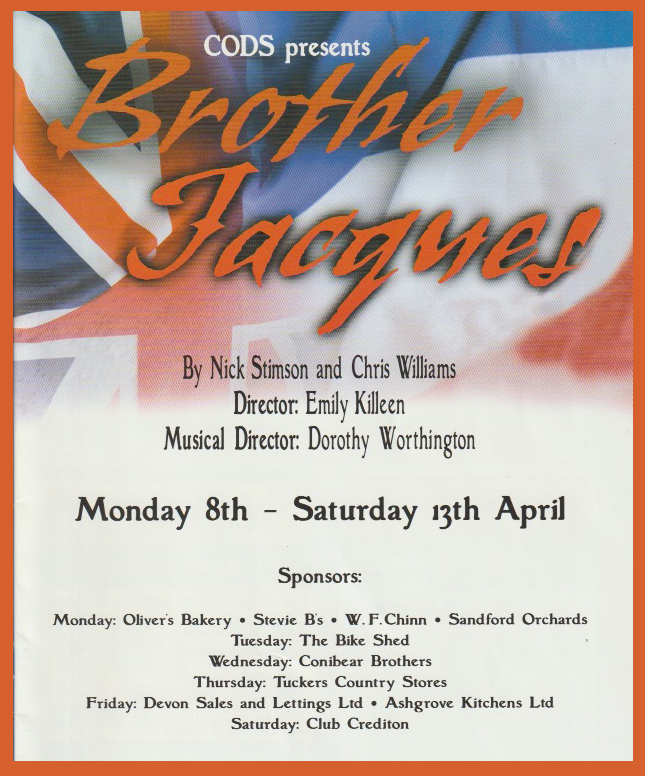 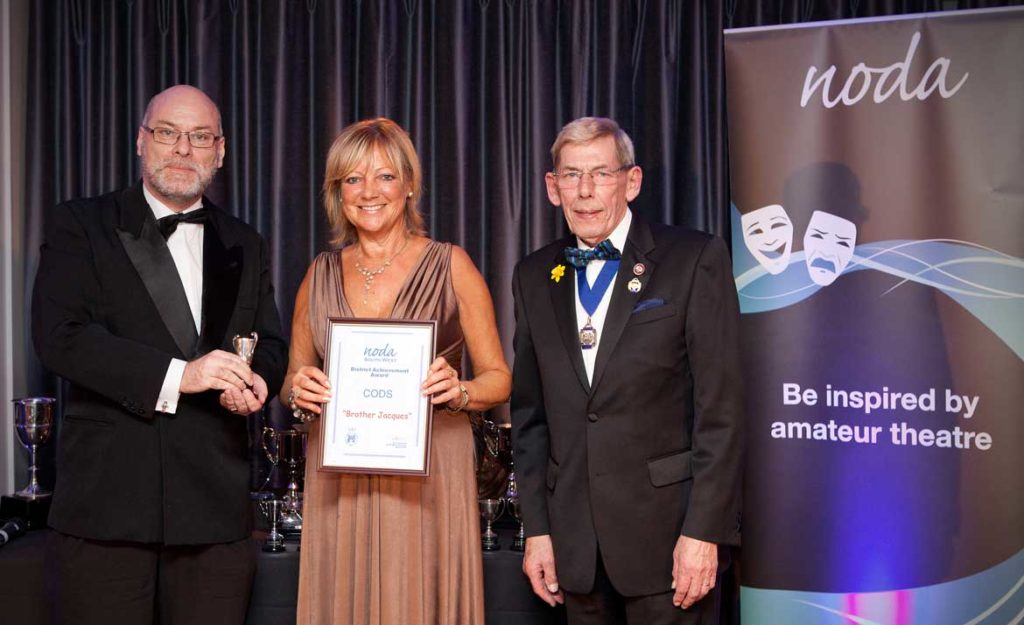 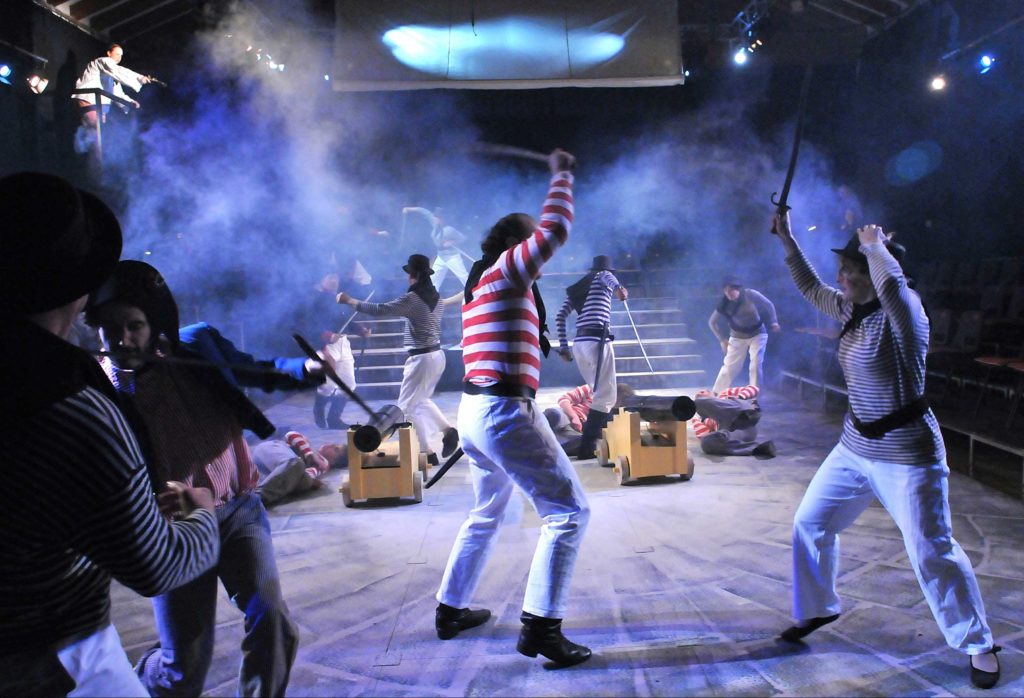 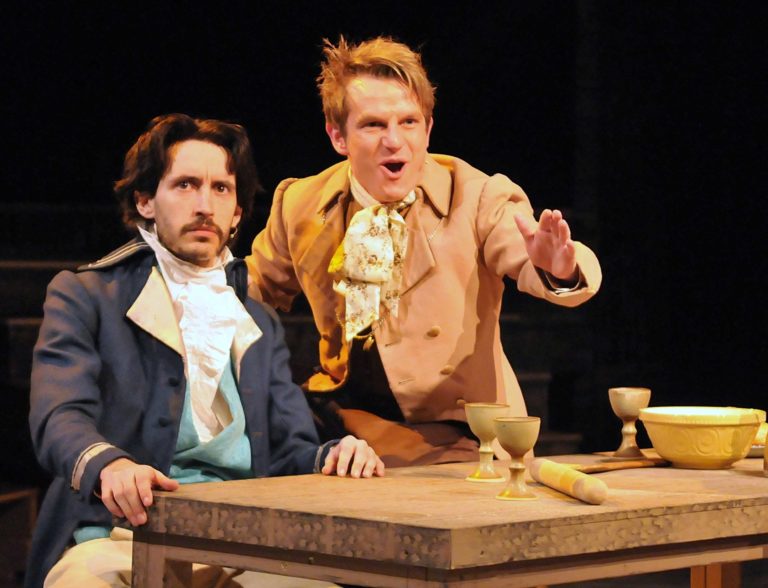 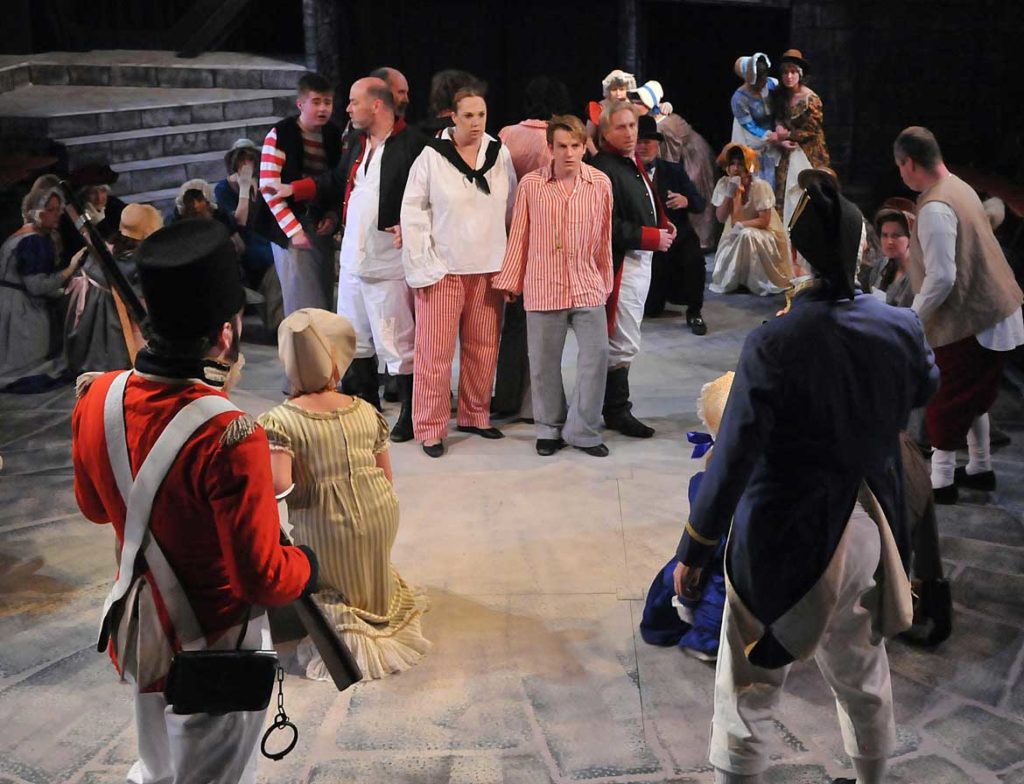 As I approached the hall, and took my seat, the set took my breath away, first encountering a “prisoner” in a very small cage-like cell, immediately giving the impression of being part of the show. I have been told that CODS nearly always perform shows in the round, for this alone the society deserve an accolade. To transform a school hall into the atmospheric French city of days gone by complete with guillotine and all that goes with it was very skilled and effective.

Having a plot which involved Crediton made this almost into a community play and maybe this went some way to explaining the obvious passion and commitment shown by every performer from the leads right down to the smallest chorus role.

Being so close to the performers made it obvious that everyone and I mean everyone, on the set had put their life and soul into this musical drama.

The costumes were extremely good, the singing wonderful and sung with such strength of meaning.

Jacques gave a very powerful performance as did Francois. Grace and Mary-Ann both sang and acted with real feeling and were a joy to watch, Guy De Morrette also gave a great performance.

The drowning scene was particularly cleverly done with the effect of the body floating in water, as was the scene where King George was aware of the French threat before anyone else.

There were so many on stage, too many to name, but all gave their most to their parts and are to be congratulated. It was a big cast but the groupings and different areas of the set in which to perform never looked crowded.

The music was sung both sensitively and stirringly getting the light and shade just right. The Instrumental Group played well, discreetly hidden from view but a joy to hear, my congratulations to the MD Dorothy Worthington.

The Director Emily Killeen should be feeling very pleased with herself on a job well done.

This was a show that was performed to the highest of standards and one that I shall remember for along time to come.