A BUNCH OF AMATEURS by Ian Hislop and Nick Newman originated from the 2008 British film of the same name. The film , staring Burt Reynolds, Imelda Staunton and Derek Jacobi, has now taken on a new lease life with the stage play and is proving very popular with it’s audiences.

So here’s the scenario …. A somewhat faded, possibly even washed up, vainglorious Hollywood actor comes to England as his agent has managed to get him the ultimate acting role.

He’s to play Lear in Shakespeare’s powerful play. Not only that, he’s playing the part in Stratford! It doesn’t get much better does it as an opportunity to revive one’s career? King Lear at Stratford, now that’s something to relish.

There’s just one small problem. Unfortunately his agent is either unaware of English culture, or his geographical knowledge of the country leaves something to be desired. The Stratford in question is sadly not ‘Upon Avon’, it’s just a little less well known. 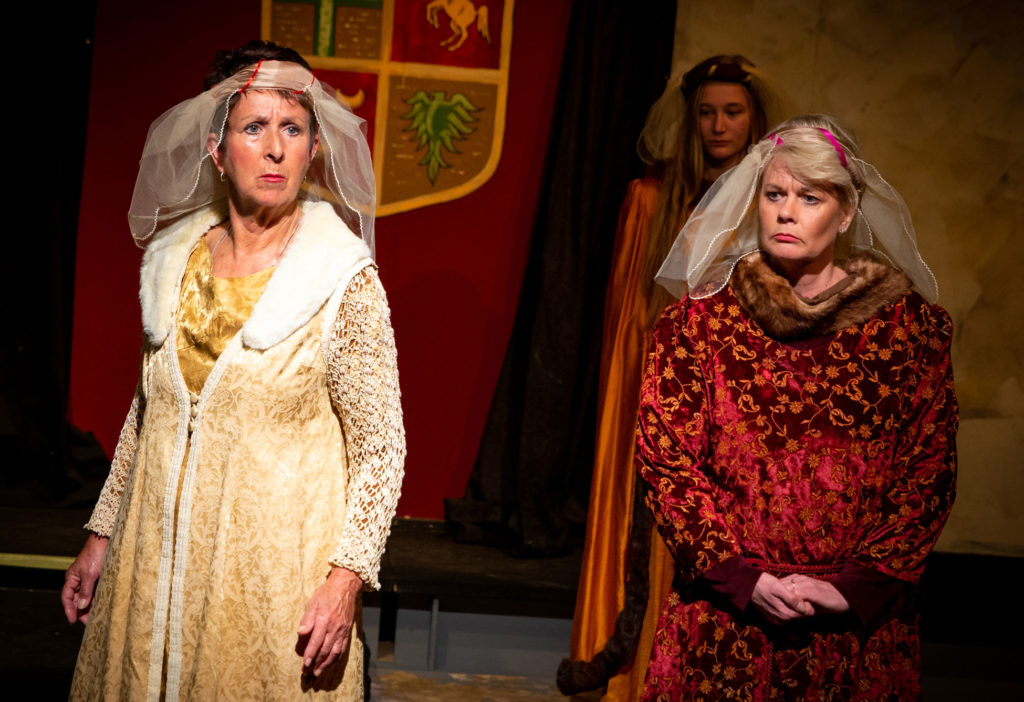 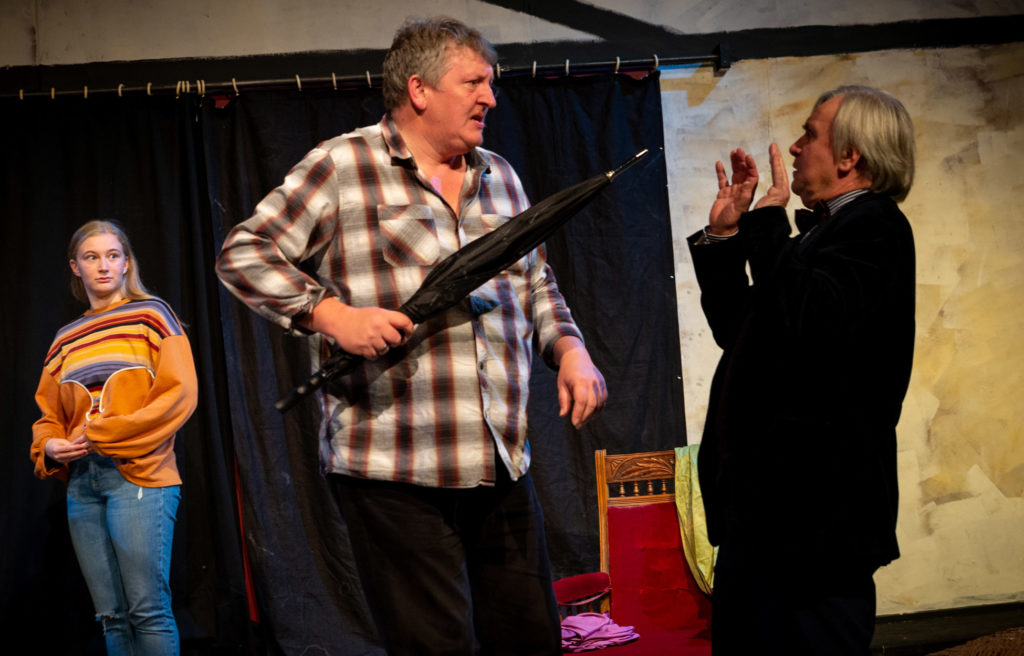 Stratford St John is a small village tucked away in the deep county of Suffolk. There is no Swan Theatre, but a little less magnificent local barn which has seen better times. The barn is nevertheless less much loved by the local Am Dram group who work hard to keep it open.

This motley bunch of enthusiasts are an interesting group of personalities, all with their own individuality, and their own hang ups! Added to this ‘Bunch of Amateurs’ Jefferson’s daughter arrives. Sadly he has put his career before her interests, and now in her late teens, she’s about to make him pay for the lack of attention.

The Stratford Players see their production of King Lear as a last opportunity to save their theatre. Engaging the services of a’Big Name’ was thought to be a way of putting bums on seats.

Sadly Jefferson Steele is a bit of a last resort. He’s the only person they could find, and the job at Stratford St John the only job Steele’s agent could find this overrated actor.

Steele arrives with all the expected bluster and hype. He proves totally inept as a Shakespearean actor …. at least at first. But as the plot unravels, with all its complications, maybe, just maybe, this fading star will revive his career, and more importantly find himself as a person? Perchance to dream. 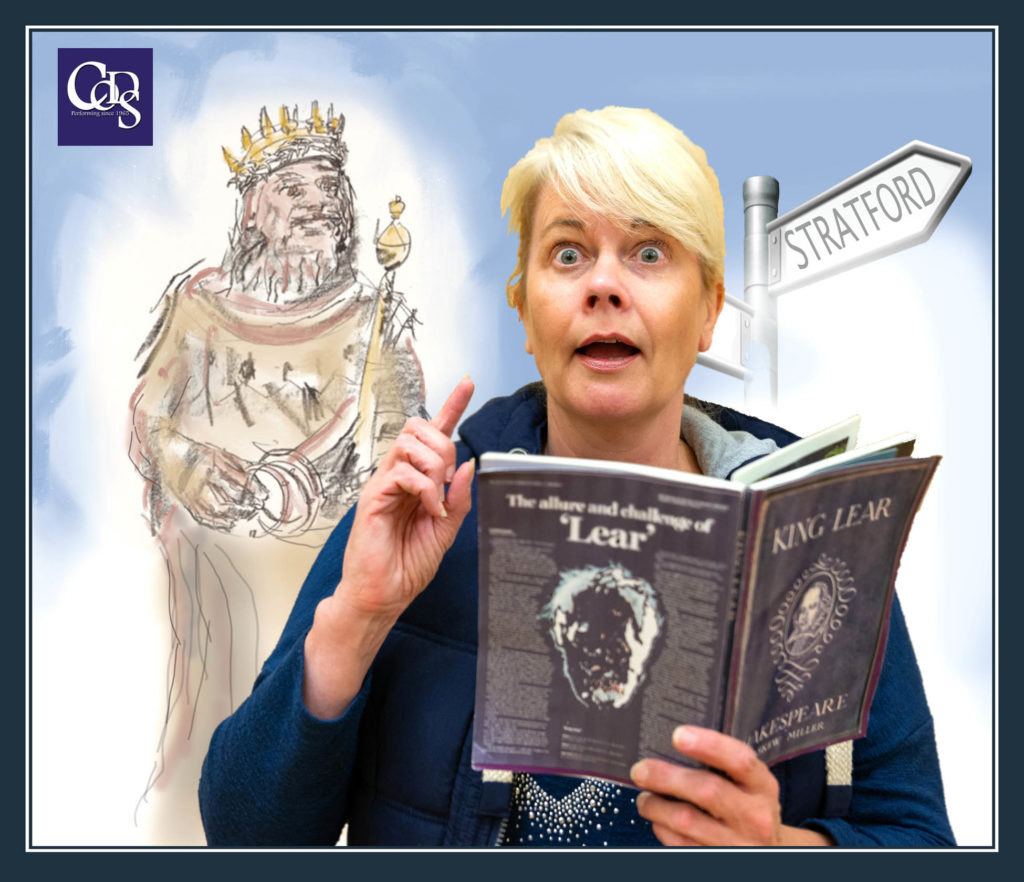 A BUNCH OF AMATEURS : NODA REVIEW

I have seen this play a number of times now and I really enjoy it.  It is so cleverly written, showing the quirks of human nature, the weaknesses, and strengths.  It is also quite tricky to stage.  There are many scenes which need to show that time has passed.  The temptation exists to show a complete change of clothing at each scene change.  This can make a break in proceedings during which the audience’s involvement in the story drifts off.  CODS were fortunate in that they use a school hall to perform their plays.  The acting area is wide which enabled them to preset the different scenes, the barn, the guest house, and the bedroom.  They also kept costume changes to the minimum.  A shirt or top or some other clothing was changed.  This was quite sufficient, after all in real life we quite often wear something two days running, it keeps down the washing!  The auditorium was used as the journey from guest house to the barn.  Dialogue continued during this journey and it gave precious moments for the stage crew to do whatever was necessary to effect the scene change.  During some scene changes,  appropriate”Elizabethan” sounding music was played on the keyboard and recorder by Mike and Gillian.  By these various measures what usually is a difficulty with this play did not even present itself.

Live theatre can be a risky business.  It doesn’t matter how long the rehearsal period or how prepared you are, things can happen.  On the evening I was there I was aware that Jefferson was sitting somewhat in the shadows while Dorothy was talking to him.   An interesting bit of direction I thought.  No, A fuse had gone but the way it was dealt with was neat.  There would have been many in the audience who would not have even noticed.

It was interesting to see Jefferson, the aging, somewhat faded movie star, played as someone who, although showing little regard for his personal appearance, still exuded the ego and self-belief/obsession of a star in his heyday.  This brought a great deal of truth to the performance, a lovely interpretation.   Jessica, his teenage daughter, cynical beyond her years, at least when it came to understanding her father, was played by a young lady who looked right and acted the role very convincingly.  Although well used to musicals I understand she is comparatively new to the world of drama.  I would expect her time will be very full with both plays and musicals in the future.    Denis was played by a young man adopting a Bristol accent.  The softness of the speech together with the measured mannerisms helped to promote the appearance of a rather simple character.  Nicely done, the accent was a good choice.  Nigel, so steeped in Shakespeare, struggles to accept Jefferson, he feels that the role of King Lear should be his.  Convincingly played by an actor whose voice and presence would indeed be at home in a play by the Bard.  Lauren, the wife of the sponsor, initially not involved in King Lear but clearly would love to be, is also a very able physio and massages Jefferson’s aching back.  This almost causes the canceling of the play.  A pivotal role played with empathy.  Dorothy, the director of the players, is trying to hold the group together against the odds.  A strong person but also a kindly one and both elements of the personality showed well.  Mary, the owner of the guest house, falls for Jefferson but is too obvious and persistent in her advances and Jefferson backs away.  This was played with energy and commitment.  The actress playing the journalist also prompted, this can be a vital part of the production and indeed was needed on a couple of occasions.  It was done well and allowed the story to continue almost without interruption.

The set was simple and unfussy.  The costumes were what one would expect a bunch of amateurs to be wearing.   Unusually Jefferson was dressed very casually in sweatpants and a tee shirt, it worked, it helped to show his disregard of others.   Lighting and sound were good.  Diction was good, every word could be heard.  Stage management was in very good hands and coupled with careful planning of the scene changes enabled the audience to enjoy the evening without interruption.

This was a great evening’s entertainment much enjoyed by the audience.