Crediton Operatic Society, now known as CODS, began life in 1964 with a public meeting to form a G and S Society.

The first musical production ‘HMS Pinafore’ was staged in 1965. Over 60 people were involved in that production. A great achievement for a newly formed group.

HMS Pinafore cost approximately £280 to stage. Contrast this with our current main Musical Productions which cost on average about £15,000- £18,000 to produce.

The orchestra consisted of piano and drums. The then Shelly School made no charge for the use of the premises!

The first programme cost an extortionate 6d  (Old money that is!) 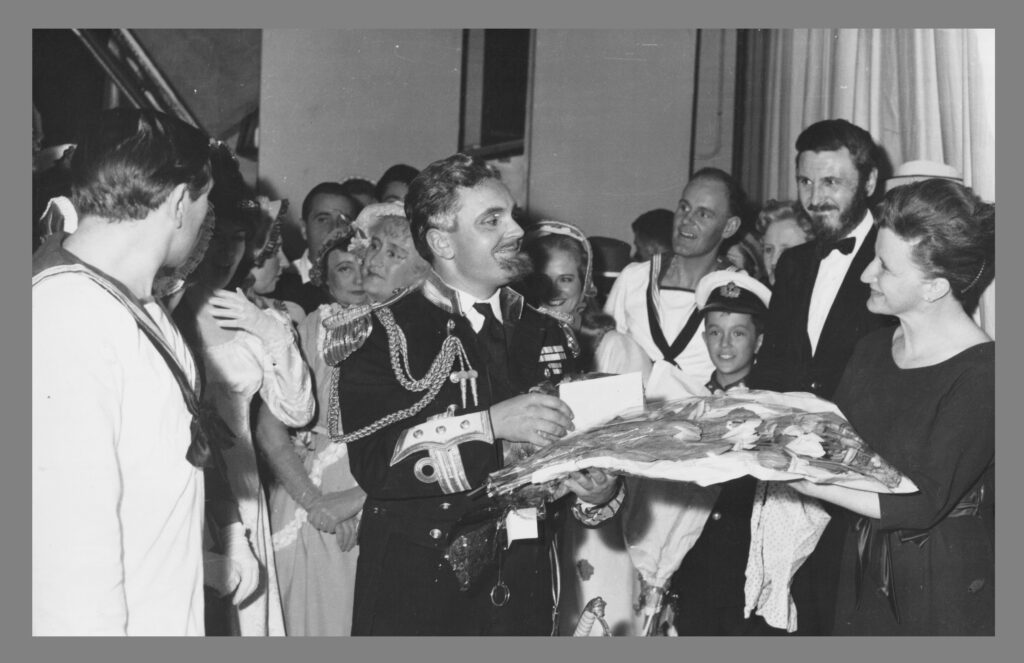 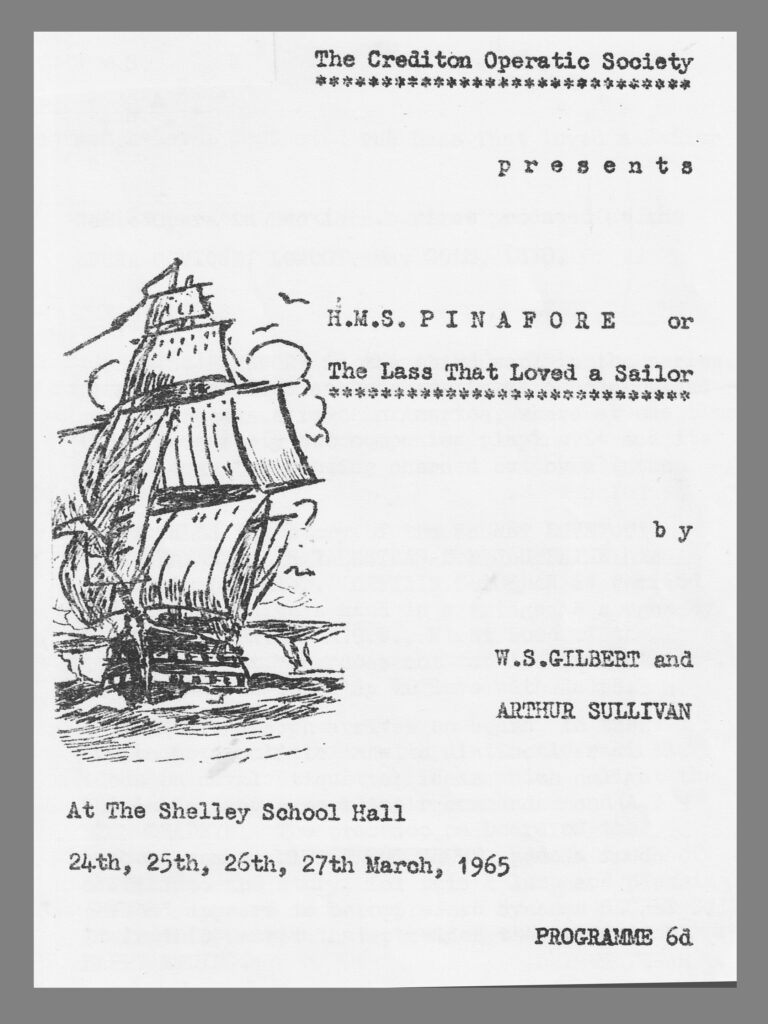 They chose a good time to begin. The middle of the “Swinging Sixties”  Sex, Drugs and Gilbert and Sullivan!

So, how did it all happen? Where did the idea originate? Who dreamt it all up? Does any one know?

“What this town needs”, said Mr George Sheppard to his lovely wife Dorothy, “is a Gilbert and Sullivan Society,”.

But how to go about it ….. In the coming weeks a meeting was publicised and arranged at Shelly School. Would anyone turn up, would there really be any interest…. brows were furrowed and nails were bitten!

They needn’t have worried …. On 27th April 1964 over 40 people attended their meeting and there was great enthusiasm to put on a G and S production.

So, a committee was formed, further meetings turned into rehearsals and the result was a production of HMS Pinafore at the Shelly School from 24th to 27th March 1965 with 26 ladies as sisters cousins and aunts in the ladies chorus ….. And 13 men as sailors and marines in the men’s chorus plus 10 principals. A total of 49 performers. Not bad for starters!

The group called themselves COS Crediton Operatic Society …… Not Crediton Gilbert and Sullivan Society, and that was due to the wisdom of a gentleman, whose daughter sits in the Altos this evening ….. It was Mr Derrick Lyon who suggested that Crediton Gand S society might limit the scope of future productions and so COS it was.

The society was on its way ….

And so …. COS was up and running. In those early days very much on a shoestring …… things were begged, borrowed, though probably not stolen.

Services given for free to support the new enterprise, and the charges that were made were very modest. Even the programme for the first production cost only 6d …. In old money. And I’m told the school didn’t even charge for the use of the premises. …. Sadly not any more!

The first producer was a gentleman who attended the initial meeting with no idea of the responsibility he would finish up with.

Mr Tony Staden, a lecturer at Exeter University with no experience of producing anything before and little knowledge of Gand S manfully took on the role.

The Musical Director was Dorothy Sheppard who went on to become a musical legend in Crediton with all the work she did with choruses, choirs etc.

The programme for Pinafore proudly announced on its last page that the NEXT production would be The Mikado….. In fact it turned out to be the Gondoliers, plus Cox and Box and Trial by Jury. …… The society was getting confident! 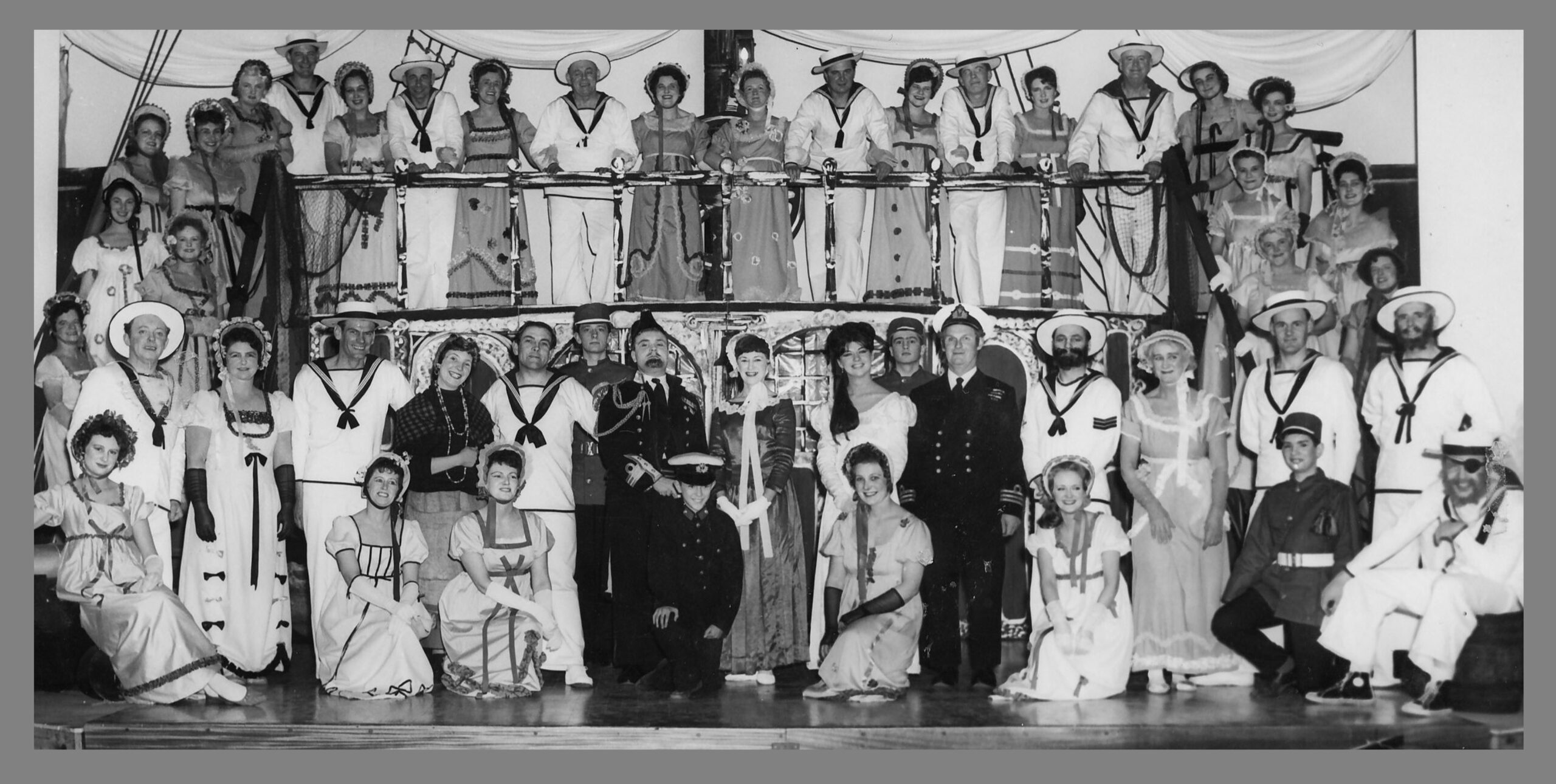 Although it was well over 50 years ago, somehow the original soundtrack of the production has survived!

Recorded on 1965 sound equipment and saved on a reel to reel domestic tape recorder, the soundtrack has been digitised and converted to mp3 format and saved to Youtube as a video. so it has become a soundtrack with some images of the original show for visual effect!

The recording is not perfect, as you would expect there is some hiss and some distortion. However it is a nostalgic record of that very first production and worth its place on our website for that reason.

The sound track is in four parts of about 20 minutes in each section. The photographic additions are the same for each recording. 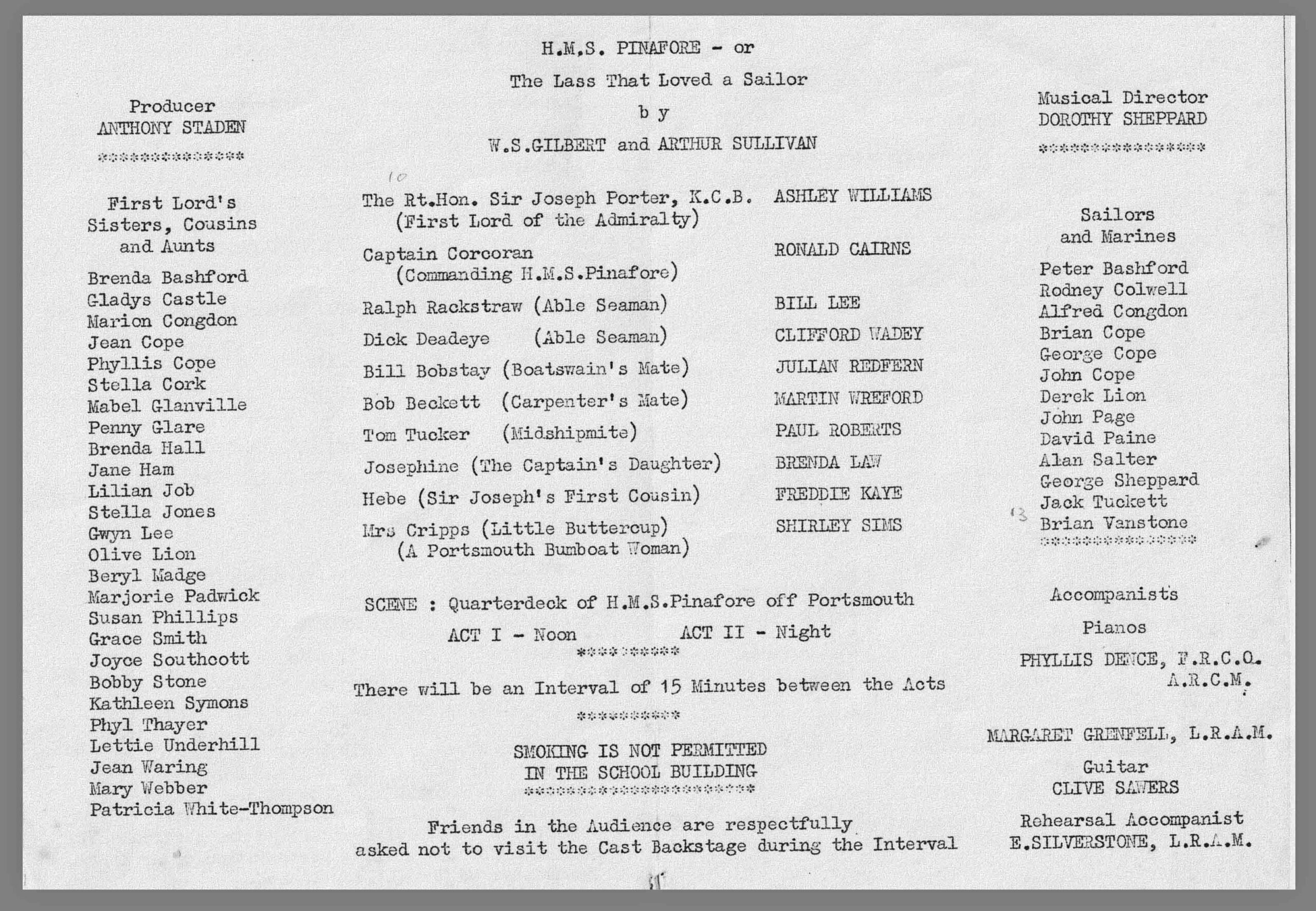 As one can see from the list of names in the Cast section of the programme, it is quite remarkable how COS (it wasn’t CODS until 1972) went from a public meeting to a production with huge involvement in a very short time. This list does not include the production team but you can see their names listed on any of the Soundtrack videos.

And so COS grew into a vibrant and successful society and went on to present The Gondoliers, Cox & Box, Trial by Jury in 1966, The Mikado in 1967, Iolanthe in 1968 and so on ….. and is still going strong in the present day.